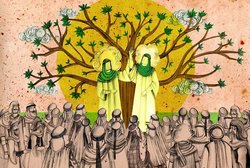 But all Muslims should study what has been written by contemporary Shi’ah researchers and ‎great Shi’ah scholars. Their works have been praised by the ulama, intellectuals, and prominent ‎figures of the entire world of Islam. This is a reasonable request. They should not confine ‎themselves to their own sources. They should not deprive themselves of the works produced by ‎the scholars of other Islamic denominations. Allamah Amini’s “al-Ghadir” and the books written ‎by the late Sayyid Sharaf al-Din are a collection of religious realities. Ghadir is an important ‎historical event. In many of his books, Allamah Amini cited tens of Sunni sources that narrate ‎Ghadir the way Shi’ah do. Ghadir has not just been narrated in our books. Some people may ‎disagree about the meaning of mawla, but Ghadir was a historical event that established a ‎criterion [for leadership]. It is obvious to all Muslims and Muslim rulers that the Commander of ‎the Faithful was a peak of perfection.‎

The late Allamah Amini - the author of the book “al-Ghadir” - and Shahid Motahhari believed ‎that Ghadir is a source of unity for the Islamic ummah. Some people should not assume that ‎Ghadir is a source of discord. That is not the case. Today Shi’ah Muslims are being accused ‎more than the past. Shi’ah Islam is rooted in a correct, healthy, and pure belief in divine ‎revelations. That is the meaning of Shi’ah Islam. Shi’ah Islam means being committed to the ‎values and Quranic criteria. Some people may talk nonsense and accuse Shi’ah Islam of ‎something that has nothing to do with it. They may say that Shi’ah Islam is a fake sect. They ‎may claim that Shi’ah Islam is political in nature and that it has been added to Islam later on. ‎Ghadir invalidates all these claims.‎

Some people try to show that this great Islamic movement and its followers are outside the ‎scope of Islam. What do they gain out of this? Today policies are being adopted to promote this ‎idea. Why? Because thanks to the spirit of wilayah, Shi’ah Islam has managed to achieve ‎something that was a dream for all Muslims. In the past, all benevolent, committed, and ‎sympathetic Muslims wished that Islam would one day gain power and would restore its original ‎unity and authority. Muslim intellectuals of the past few centuries lived out their lives, wishing ‎to see such a day. Today Shi’ah Islam has fulfilled this dream - the dream of Islamic rule, ‎grandeur, and dignity. This achievement has been made thanks to the spirit of wilayah. The ‎enemy can see this. It wants to scatter the supporters of Shi’ah Islam and wilayah. As a result, ‎today more accusations are levelled against Shi’ah Islam than ever before. Throughout history, ‎there have been some twisted individuals who have talked against Shi’ah Islam, levelled ‎accusations against it, and spread lies about it. But today these accusations are far more than ‎ever before, and this state of affairs is due to the policies adopted by the arrogant powers. Why ‎do they not understand this?‎

We should all try to understand this. Shi’ah Muslims should try to understand this. We should ‎know that the policies of the arrogant powers are aimed at separating Shi’ah Muslims form non-‎Shi’ah Muslims. We should know that their policies are aimed at dividing Muslim denominations ‎and pitching them against one another. We should not help them achieve this goal. We should ‎prevent the enemy from achieving this goal. Both Shi’ah and non-Shi’ah Muslims are ‎responsible in this regard. Today it is Shi’ah Muslims in Islamic Iran who have raised the flag of ‎Islamic power and glory, and the arrogant powers feel powerless. All Muslims should know this. ‎This is a fact. The plots that have been hatched by the enemies - the United States being the ‎most important, and the United Kingdom being the evilest among them - against the Islamic ‎Republic during the past 30 years are all due to the fact that they are terrified. They are ‎terrified of the Islamic movement and Islamic Awakening. The areas that are populated by ‎Muslims are the most strategic areas in the world. They know that they will have no control ‎over these areas when Muslims wake up to the realities, pay attention, and feel independent ‎and powerful. They know that they will lose control of these strategic areas when Muslims feel ‎their Islamic identity. They are afraid of this. They hatch plots because they are afraid. They ‎use various means to achieve their goal. Today the leaders of arrogant policies - namely, the ‎United States, the Zionists, and other arrogant powers of the world - are using all their power in ‎order to isolate the Iranian nation and the Islamic Republic. So far, they have not achieved this ‎goal. And by God’s grace, they will not be able to do so in the future either.‎