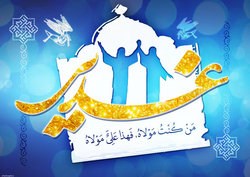 The eighth Annual Ghadir Conference was begun in the holy shrine of Imam Ali (AS) in Najaf Ahraf.

According to the correspondent of Rasa News Agency in Najaf Ashraf, the eight Anuual Ghadir Conference was begun in the holy shrine of Imam Ali (AS) in the presence of some seminary and academic figures and representatives of sources of emulation and custodian offices of Iraqi holy shrines.

This conference has some different parts and programs, including differnet exhibitions, raising the flag of Amir al-Momenin (AS) in some Iraqi universities and holding celebrations on Eid Ghadir.

Moreover, the eighth Annual Ghadir Conference is going to hold a poem reciting ceremony in Imam Ali (AS) shrine with some distinguished poets coming from the shrines of Imam Hussain (AS), Hazrat Abbas (AS), Imam Moosa Kazim (AS) and Kufa mosque.