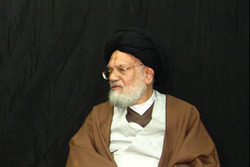 An Iraqi source of emulation, issuing a fatwa, announced that the presence of the US forces in Iraq is illicit and asked Iraqis to keep on putting up resistance.

RNA - Ayatollah Sayyed Kazem Hussaini Haeri, an Iraqi source of emulation, issuing a fatwa, announced the presence of the US forces in Iraq illicit and pointed to resistance as the sole solution.

According to RT Arabic, the fatwa, stressing that Americans are terrorists and supporter of terrorists, reads:

O my dear children in the IPMF! I received the news on Zionists targeting your arsenals!

All know that Americans haven’t taken lessons from their defeats in Afghanistan, Yemen, Syria and Palestine, and it still ruins the wealth and children of different nations.

Saddam was also wrongly installed and dethroned by the US in Iraq. The US also formed the ISIS and such mistakes have inflicted serious damage uopn Iraq.

Hereby, I openly announce that the presence of the US forces, under any pretext, military training or consultation, in Iraq is illicit from now on. Our courageous men are supposed to defend Islam and solidarity of Iraq against all attacks. There is only one option before you, and it is Resistance and defence against the enemy!

If it was possible for your father, he would take up arm and fight by you like a soldier.