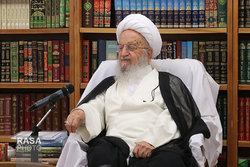 Ayatollah Makarem Shirzai stressed the elaboration on Ghadir for the youth and called Ghadir the most important event in the history of Islam.

RNA - An the anniversary of Ghadir Khom Eid, Ayatollah Makarem Shirazi attended in the march ceremony of the lovers of the guardianship, held in Qom.

On the sidelines of this event, Ayatollah Makarem congratulated all people on this happy occasion. He called the ceremony of Ghadir march an innovative blessed act that should be held each year so that Ghadir is introduced to the present and future generations.

Saying that Ghadir Eid is a highly significant event in the history of Islam, this source of emulation stressed the need for elaboration on this important event.

Ayatollah Makarem further noted, "Following the appointment of the Prophet Muhammad (S), Ghadir is the most important event in the history of Islam.

The prominent teacher of Qom Seminary's advanced courses, saying that Ghadir event is approved of by Sunnis, stated, "Some hostile groups have attempted to cast impugn Ghadir, even some have said that Ghadir Event is the making of the Shiites, nonetheless, Sunni books also corroborate this event."

Heads of Muslim countries should obediently follow Amir al-Momenin (AS)