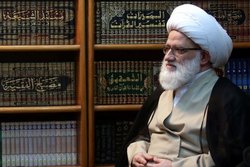 Ayatollah Yaqubi pointed out, “Hussaini Mukebs should work to awake people culturally and resolve their problems.”

According to the correspondent of Rasa News Agency in Najaf Ashraf, Ayatollah Yaqubi, an Iraqi scholar, visited by a group of people working in the mukebs (a place for serving pilgrims) of Imam Hussain (AS) in Dhi Qar province, emphasized on those good deeds that both  benefit people and resolve their problems and then said, “Hussaini mukebs play a significant part in keeping the religious traditions alive and providing the pilgrims with better services.”

He added, “What mukebs do is not confined to serving pilgrims, yet, they are supposed to be active in social and cultural fields and take some steps on the revival of the international day of repenting, fatwa and etc.”

This Iraqi scholar stressed that Hussaini Mukebs should do their best in order to awake people culturally and resolve their problems.