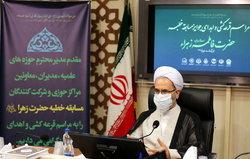 The head of the Islamic Seminaries of Iran said, “The Sermon of Fadak of Lady Fatimah al-‎Zahra is a symbol of deep thought, the manner of worship and obeying God Almighty.”‎

RNA – In a speech at the closing ceremony and lottery at Sermon of Fadak reading contest ‎at the Ayatollah Haeri Assembly Centre of the Management Centre of the Islamic Seminaries, ‎Ayatollah Alireza Arafi said, “Although Lady Fatimah al-Zahra is famous among the Shi’ahs for ‎living to only 18 years of age and her life was seemingly short based on the social calendar, but ‎in the epistemological, intellectual, social and political calendar, her short life is as valuable to ‎the extent of centuries.”‎

The head of the Islamic Seminaries of Iran continued, “If the seemingly short life of Lady ‎Fatimah is evaluated from the scientific, epistemological and influential dimensions, becomes ‎the same symbol of the verse ‘Indeed We have given you abundance’ [108:1] and the ‎sermon of Lady Fatimah remained so enduring, constructive and guiding and will be effective ‎until the Day of Resurrection.”‎

He added, “The design of this sermon is in fact of a lofty and elegant design and ‎architecture, which can be described as an important and historical speech of the Holy ‎Prophet Muhammad on the Day of Ghadir and the permanence of the event of Fadak. Lady ‎Fatimah’s remarks in the Sermon of Fadak are a series of preparations and a macro and ‎strategic management in that turbulent political and social period after the death of the ‎Prophet.”‎

Ayatollah Arafi stated, “If we examine the grief of Fadak and Ashura limited to that period, ‎region and section, it may not have such an achievement, but if we evaluate its logic and ‎extent throughout history and to the extent of the history of Islam, we will see that Fadak ‎and Ashura have both been victorious in the battlefield. The Imam’s work prevented it from ‎being extinguished and raised the flag of Islam so that it would not get lost.”‎

The member of the Supreme Council of the Islamic Seminaries stated that Sermon of Fadak ‎can be divided into several other aspects in content analysis and explained, “Explaining the ‎intellectual and doctrinal foundations of Islam with that pure and correct reading in such a ‎way that the explanation of monotheism in the words of Lady Fatimah and Imam Ali is ‎lesser-known than any of the Pure Imams, such that at the beginning of the sermon, she ‎explains the beliefs and principles of religion in depth and breadth.”‎

He added, “In this sermon, Lady Fatimah explained the philosophy of the legal rules and her ‎deep view of the rules of Islam in a very distinguished and excellent manner and the way she ‎dealt with Islamic worship is unique.”‎

The member of the Society of Seminary Teachers of Qom explained the story of Fadak as ‎another important aspect of the Sermon of Fadak of Lady Fatimah and added, “In this part, ‎the Imam strengthens the jurisprudential foundations of the Ahl al-Bayt and this effort has ‎been able to create an approximate view so that Lady Fatimah and Imam Ali, in the same ‎position and rank that they had, considered the interests of the Islamic world and were the ‎pioneers of unity. Thus, the great flag of Fadak both increases knowledge and initiates unity ‎and convergence in the Muslim ummah.”‎

The Sermon of Fadak was a speech delivered by Lady Fatimah in the Prophet’s Mosque. ‎Lady Fatimah delivered this sermon in the presence of Umar, Abu Bakr and a group of ‎Prophet Muhammad’s companions who had gathered in the mosque. She entered the ‎mosque with a group of women and her trusted servant. Fadak was part of the bounty ‎given to the Prophet Muhammad, and much before his death he bequeathed it to Lady ‎Fatimah.‎