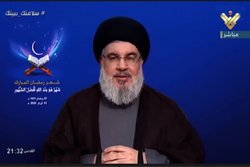 The head of Lebanon’s resistance movement said silence towards corruption and occupiers is not ‎permissible.‎

RNA – In a speech aired on the Arabic-language al-Manar TV on Friday night, Secretary-General of ‎the Lebanese Hezbollah Resistance Movement, Hujjat al-Islam Sayyid Hasan Nasrallah talked about ‎the holy month of Ramadhan and the challenges faced by Muslims. He said he will deliver a speech ‎on the political matters on Monday, May 4.‎

Nasrallah said silence towards corruption and occupiers is not permissible.‎

He also called on the Lebanese people to exercise patience amid the current difficulties, saying that ‎patience will definitely help the nation to overcome the current challenges.‎

‎“Patience is one of the major lessons we come up from fasting in the holy month of Ramadhan,” he ‎said, adding, “God Almighty says in the Holy Quran that He is with the patient.”‎

‎“The greatest thing that humans can achieve intellectually and spiritually is to know that God is with ‎them,” the Hezbollah chief said.‎

Nasrallah also called on believers to contribute to social solidarity during Ramadhan amid the dire ‎economic conditions in Lebanon.‎

Concluding his speech, the Hezbollah chief urged believers to gain spiritual excellence in the holy ‎month of Ramadhan. ‎

Following the Coronavirus outbreak, Lebanon’s financial crisis has worsened causing renewed ‎street protests against the government's economic policies. About 90% of businesses have closed, ‎the country's national currency has lost 60 percent of its value, and food prices have soared.‎

In recent days, thousands of protesters have hit the streets overnight and clashed with the ‎Lebanese army after burning tires, vandalizing banks, and blocking roads. One demonstrator died ‎and over 40 soldiers injured.‎
‎
Mehr News