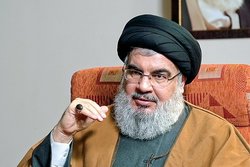 The leader of Lebanon’s Hezbollah resistance movement has condemned smuggling out of an Israeli operative, who was jailed in Lebanon on security charges, by the US military, describing it as clear violation of Lebanon’s sovereignty.

RNA - Sayyed Hassan Nasrallah made the remarks in a televised speech from capital Beirut on Friday, after reports indicated that Americans have smuggled Amer al-Fakhoury out of the country.

A former member of the pro-Israeli South Lebanon Army (SLA), al-Fakhoury was also the former head of the infamous Khiam Prison, which was opened in 1984 by the SLA after Israel created a security zone in southern Lebanon.

Former prisoners have accused al-Fakhoury of ordering the torture of thousands of detainees in Khiam prison before Israel withdrew its forces from Lebanon in 2000, ending 22-year occupation of the southern part of the country.

In his Friday speech, Nasrallah said during the time that al-Fakhoury was in prison, the US continued for months to exert all forms of pressures on Lebanon and even threatened its authorities to secure al-Fakhoury’s release from prison.

“The US even threatened Lebanese judges, some of whom refused to release al-Fakhoury and some of whom finally yielded to the pressures,” the Hezbollah leader said, adding, “The US threatened to blacklist several Lebanese figures and to halt military support to Lebanese army in order to get Fakoury out of jail.”

Referring to allegations about a possible behind-the-scene deal for the release of al-Fakhoury, Nasrallah said, “We know nothing about what went on behind the scenes and do not know whether there has been a deal.”

The Hezbollah leader noted that when the resistance movement was contacted on the issue, it vehemently rejected the release of al-Fakhoury, saying, “Hezbollah didn’t know that charges against al-Fakhoury had been dropped in advance.”

Nasrallah noted that on one occasion, the Americans even wanted to take al-Fakhoury out of the country through Beirut airport, but Lebanese security forces prevented his escape.

He also rejected claims that Hezbollah had agreed to al-Fakhoury’s release, saying, “Hezbollah is just a political force in Lebanon, which has representatives [at the parliament] and ministers [in the cabinet], but neither the government, nor its institutions … are affiliated with Hezbollah. Therefore, those who insist on blaming Hezbollah for the release of al-Fakhoury are playing the enemy’s game.”

“Al-Fakhoury’s escape sets a dangerous precedent and provides the ground for the United States to impose anything it wants on Lebanon in future,” Nasrallah said.

According to reports, al-Fakhoury was transferred to the US embassy in Beirut before his secret exit from Lebanon on Thursday.

Lebanon’s justice system had called for al-Fakhoury’s retrial and had issued an arrest warrant for him, before the US intervention.

Journalism in Kashmir in ‘dramatic state of repression:’