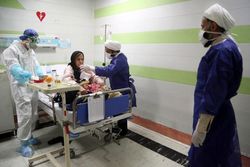 The latest COVID-19 statistics in Qom province show that potential hospitalizations due to COVID-19 ‎are increasing day by day.‎

RNA – According to the latest studies on COVID-19 in Iran, as of April 19th, an upward trend or the ‎beginning of ‎a peak has been seen in five provinces of Iran – Qom, Kohgiluyeh and Boyer-Ahmad, ‎Mazandaran, West ‎Azerbaijan and Ardabil – although the disease has declined in the whole country.‎

According to epidemiological studies conducted on the process of infection and spread of the ‎Coronavirus in Iran and the world, published by Iran’s Ministry of Health and Medical Education, more ‎than 2,340,856 people in the world have contracted the Coronavirus as of April 19th of which ‎‎160,903 people have died.‎

In the world as a whole, the United States, Spain, Italy, France, and Germany are the first to fifth in ‎the rank of countries suffering from the Coronavirus.‎

According to a report released by the Ministry of Health and Medical Education, Iran ranks ninth in ‎countries suffering from the Coronavirus. According to statistics released by the same ministry, ‎‎82,211 people have contracted the Coronavirus as of April 19, of which a total of 5,118 people have ‎died and 57,023 have recovered. According to studies, the highest number of verified cases of this ‎virus were identified on March 30. ‎

The latest COVID-19 statistics in Qom province show that potential hospitalizations due to COVID-19 ‎are increasing day by day.‎

Dr. Mohammad- Reza Qadir, the president of Qom University of Medical Sciences, said, “During the ‎last 24 hours and as of 2:00 pm on Saturday [April 18], 84 people were admitted to medical centres ‎in Qom ‎with a possible diagnosis of COVID-19.‎”‎

‎He added, “34 of them were hospitalized in the wards of the hospitals and the rest were discharged ‎after being ‎examined and treated in the emergency department of the centres with medical and ‎health ‎instructions.”‎

In the past 24 hours, only 26 patients were discharged from the hospital.‎

Over 83,000 infected by Coronavirus in Iran