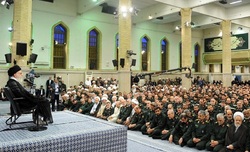 RNA – General Brigadier General Mohammad Shirazi, the head of the Military Office of the ‎Commander-in-Chief of the Armed Forces, called Hoseyn Salami, the Commander-in-Chief of ‎the Islamic Revolution Guards Corps (IRGC), and passed on a message from the Supreme ‎Leader of the Islamic Revolution, Ayatollah Khamenei, on the occasion of the anniversary of ‎the establishment of the IRGC. ‎

Ayatollah Khamenei is the commander-in-chief of the Iranian Armed Forces.‎

The IRGC was founded after the Iranian Revolution on April 22 1979 by the order of ‎Ayatollah Sayyed Ruhollah Khomeyni with the intention to protect Iran’s Islamic republic ‎political system. The IRGC base their role in protecting the Islamic system as well as ‎preventing foreign interference and coups by deviant movements.‎

The text of Ayatollah Khamenei’s message is as follows:‎

‎“Convey my greeting to the members of the IRGC and their respected families on the ‎occasion of the anniversary of the founding of the IRGC. I thank the IRGC for its good ‎performance and efforts and I pray for them.” ‎

Head of the Society of Seminary Teachers of Qom:‎

Due to difficulties posed by Coronavirus, let’s not neglect to help the needy and the weak

Hope in the ultimate reform by Imam Mahdi ('a.j.) is an inviolable hope