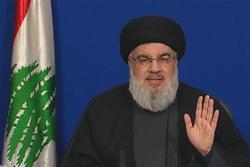 Secretary-general of the Lebanese resistance movement of Hezbollah strongly criticizes the US’s avoiding transparency concerning the extent of the outbreak of the deadly new coronavirus.

RNA - “We are in the middle of a battle that resembles a world war,” Seyyed Hassan Nasrallah said during a televised speech on Friday, commenting on the enormity of the outbreak, Lebanon’s Naharnet news website reported.

US President Donald Trump and his team have, however, been “the worst liars” when it comes to fighting the new virus, the Hezbollah chief added.

He cited Trump’s effort to downplay the risk posed by the virus, and said the US and the UK have been concealing the real number of those infected with the virus.

The virus emerged in the central Chinese city of Wuhan late last year. It has so far infected over 137,000 people and killed more than 5,000 others.

Nasrallah hailed the Lebanese Health Ministry’s transparency in reporting the figures that concern the outbreak, and said the resistance movement’s entire resources and potential were at the government’s disposal to be used towards fighting the deadly virus.

Battling the virus now constituted the government’s top priority, he said, and noted that confronting the issue was a national duty for all that had to be approached with absolute unity, Lebanon’s The Daily Star paper reported.

Nasrallah called on both his supporters and opponents to look beyond political, sectarian, and religious differences to tackle the new virus. He warned that the battle against the deadly virus would not be successful and instead would lead to greater losses if the issue was to be instrumentalized for political gains.

US sanctions on Iran

The Hezbollah chief denounced the US’s attitude towards Iran amid the Islamic Republic’s tough battle against the viral outbreak.

He said what the Islamic Republic was currently in need of was not the US’s help -- apparently referring to Washington’s offers of assistance for Iran’s preventative measures -- but the removal of the American sanctions.

Tehran, itself, has condemned such proposals as duplicitous, reminding that the US was making such offers while retaining the sanctions and preventing exports of food and medicine to the Islamic Republic.

The Hezbollah chief also hailed Iran’s observance of the principle of transparency amid the outbreak.

He also criticized some Persian Gulf countries’ media outlets for trying to direct attention towards some Iranian authorities’ reported affliction with the virus. Nasrallah called such officials, who stand with their people and are infected with the virus amid their efforts to provide service for the nation, a source of pride.

Separately, the Hezbollah secretary-general pointed to Lebanon’s financial crisis, saying he did not oppose foreign assistance, not even from the International Monetary Fund, as long as the conditions suited the Lebanese people and did not do them disservice.

"Reform, fighting corruption, transparency, and judicial independence are excellent conditions [for a rescue package] that we have asked for," The Daily Star cited him as saying.

US attacks on Iraq

Nasrallah also condemned a recent set of deadly American airstrikes against Iraq as violation of the Arab country’s sovereignty.

Earlier, the air raids targeted several locations in Iraq, including a recently-opened airport in the holy city of Karbala, killing three soldiers, two police officers, and one civilian.

According to the Iraqi military, four more soldiers, two other officers, another civilian, and five individuals affiliated with Iraq’s anti-terror Popular Mobilization Units (PMU) were also wounded in the attacks.

The Pentagon claimed the strikes had targeted five weapons stores used by Iraqi groups that “targeted US forces.”