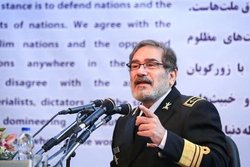 Secretary of Iran’s Supreme National Security Council (SNSC) Rear Admiral Ali Shamkhani said that it seems there is a link between the assassination of Lt. Gen. Soleimani and the US claim over Camp Taji attack.

RNA - “Visiting Iraq, I asked the Iraqi authorities to identify and introduce the internal agents involved in the assassination operation of the martyrs Soleimani and Abu Mahdi al-Muhandis,” wrote Shamkhani in a Friday tweet.

“It seems that there is a link between the plan of the assassination of Lt. Gen. Soleimani and Abu Mahdi al-Muhandis and the US claim on the attack against Camp Taji,” he added.

Marine Gen. Kenneth McKenzie, the commander of the US Central Command on Thursday said the investigation into the deadly attack Wednesday on Camp Taji north of Baghdad was ongoing, but Kataeb Hezbollah is probably the culprit.