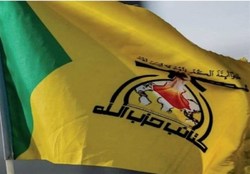 Iraq's Kata'ib Hezbollah, which is part of the Popular Mobilization Units (PMU), has strongly denounced the illegal US military presence on Iraqi soil, stressing that humiliating the Iraqi nation will not go unpunished.

RNA - In a statement released on Thursday, the major pro-government resistance group said that “the occupation forces must bear the consequences of their illegal presence and disregard for the will and dignity of the Iraqi people.”

“The right to resist the occupiers and invaders is guaranteed by the all existing norms and international law,” it added.

The resistance group, however, said it did not know what group was behind the attack on Taji military base on Wednesday during which rockets hit the military base that houses American troops north of the capital Baghdad.

No group has claimed responsibility for the attack.

In its statement, Kata'ib Hezbollah decried the denunciation of the attack by senior Iraqi officials, saying "such condemnation goes against an Iraqi parliament resolution about expulsion of US-led foreign troops" from the country.

The group also encouraged the assailants “to come forward without any fear and reveal their identity.” It gave assurances that their safety will be adequately protected.

Anti-American sentiment has been running high in Iraq following the assassination on January 3 of Iran’s top anti-terror commander Lieutenant General Qassem Soleimani along with Abu Mahdi al-Muhandis, the deputy head of Iraq’s PMU , along with their companions.

The terrorist act promoted the Iraqi parliament to vote for the expulsion of US forces from the country, but the government has not acted on the decision yet as it is grappling with a political deadlock.

The PMU also said the reaction would be “no less than in size” than Tehran’s missile strikes.

It has, however, denied repeated US claims that it had been behind rocket attacks targeting US and other foreign missions and bases in Iraq.

Reacting to the Wednesday raid, Hashd al-Sha’abi commanders once again dismissed US claims that the Iraqi force was behind the raid, describing the allegations as wrong and provocative.

The PMU says if it decides to target the US interests in Iraq, it will announce it publicly.