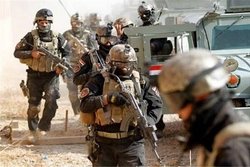 Iraqi forces have now ensured security in several rugged areas in the eastern province of Diyala following an offensive to hunt down the remnants of the Daesh Takfiri terrorists.

RNA - Sabah al-Naaman, spokesman for Iraq’s Counter Terrorism Service (CTS), said on Friday that police forces along with allied fighters from the Popular Mobilization Units, better known by the Arabic word Hashd al-Sha’abi, had destroyed enemy hideouts in Khanaqin district as well as the Hamrin Mountains.

Naaman said nearly 40 terrorists had been killed over the past three days.

Last week, Hashd al-Sha’abi launched a major operation in the western countryside of Anbar province to hunt down the Daesh remnants.

On September 21, 2019, the PMU announced the conclusion of a campaign against the sleeper cells of Daesh in the central parts of the country as well as a sector of the vast western desert leading to the border with Saudi Arabia.

The PMU media bureau announced in a statement at the time that the fifth phase of the 'Will of Victory' operation, which had started on September 16, was wrapped up as different units and forces of Iraqi military forces cleared the remote territory between the provinces of Karbala, Najaf and Anbar.

Hashd al-Sha’abi fighters have played a major role in the liberation of Daesh-held areas to the south, northeast and north of the Iraqi capital ever since the terrorists launched an offensive in the country, overrunning vast swathes in lightning attacks.

In November 2016, the Iraqi parliament voted to integrate Hashd al-Sha’abi, which was formed shortly after the emergence of Daesh, into the military.

Former Iraqi Prime Minister Haider al-Abadi declared the end of military operations against Daesh in the Arab country on December 9, 2017.

On July 10 that year, he formally declared victory over Daesh in Mosul, which served as the terrorists’ main urban stronghold in Iraq.