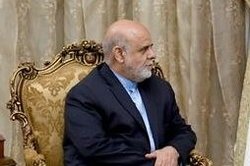 Iranian Ambassador to Iraq Iraj Masjedi underlined that the US interferences and its military deployment in the region has increased tensions and insecurities.

RNA - "The US bases do not serve anyone in the region and we are interested in resolving our problems with the Saudis and welcome any mediation, including by Iraq, in this respect" Masjedi said in an interview with the Arabic-language al-Forat news website on Saturday.

He added that the US withdrawal from the region will benefit the Americans themselves because their meddling has created tension in the regional states.

Masjedi, meantime, stressed that the Iraqi people should be the only one to decide their fate and Iran does not dictate its wishes to anyone.

Iraq's parliament last month voted to have the US troops removed from the country, heeding a call from former Prime Minister Adil Abdul Mahdi to take urgent measures and end the foreign forces presence as soon as possible.

According to Fars News Agency, the resolution, which was passed anonymously, instructed the government to cancel a request for military assistance to the US-led coalition, which was issued in response to the rise of the Islamic State of Iraq and the Levant (known as ISIL, ISIS or Daesh) terror group.

The resolution stated that Iraqi military leadership has to report the number of foreign instructors that are necessary for Iraqi national security.