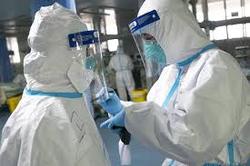 A number of interesting developments here in the United States and in China suggest that there is something very strange going on regarding the coronavirus and the US government.

RNA - A number of interesting developments here in the United States and in China suggest that there is something very strange going on regarding the coronavirus and the US government.

We are now hearing from the Chinese government itself, as well as from Chinese social media, which is normally restricted, but in this case, it's actually seems that people are being encouraged to post the same kinds of questions that we just heard from the Ministry of Foreign Affairs spokesman Geng Shuang, who suggested that the United States military brought coronavirus to China.

Here in the United States, the National Security Council, under direct orders from the White House has sealed the top emergency meetings on this topic and classified them. Only people with top secret clearances have been allowed to participate, which rules out most of the medical experts who should have been there.

So putting these two facts together, first, that the rumors on Chinese social media that were already very widespread a month ago or more, and now have gotten the official stamp of approval that the coronavirus outbreak was an act of biological warfare by the United States, it seems to be becoming the official position of the Chinese government.

And that is quite concerning, because if indeed, the US government or its allies or out of control rogue agencies within it did in fact whether deliberately as is the most likely possibility, or accidentally or some combination thereof, perhaps a clumsy effort by someone outside of the normal chain of command, whatever the truth is about this, this could set off an escalation that could easily lead to World War Three.

It's already shut down US-China trade and created the kind of decoupling of the US and Chinese economies that would be a necessary prelude to a US imperial attack on China designed to prevent China from rising to number one world power status.

The fact that the Chinese ports in Italy are also apparently targets, that Italy is being punished for becoming part of the Belt and Road Initiative, and the fact that Iran has apparently been targeted with its top leaders targeted for perhaps and especially virulent strain of coronavirus. All of this does suggest a bio-warfare component or at least that possibility.

And the fact that Trump's people have classified their meetings that there is a complete lack of transparency here on this topic is very, very worrisome.

Additionally, Americans are beginning to panic about this. The US public health system is one of the worst in the developed world if not the absolute worst; people are unable to get coronavirus tests. And there are long lines in the stores. data-x-Items have been sold out here in Madison, Wisconsin.

The biggest store in Madison yesterday was crowded with lines that went all the way from the front of the store all the way to the back. It took people hours to check out because of the panic buying. And this reflects lack of confidence in the United States government. And I'm afraid that that lack of confidence is more than justified.

Nurses are at the forefront of the fight against Coronavirus