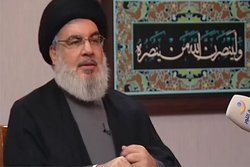 The Secretary-General of Hezbollah touched ‎upon different issues on the anniversary of the historic victory over the Israeli regime back in ‎‎2000.‎

RNA – The Secretary-General of Hezbollah, Hujjat al-Islam Sayyid Hasan Nasrallah, touched ‎upon different issues on the anniversary of the historic victory over the Israeli regime back in ‎‎2000.‎

‎“The spirit which triumphed in 2000 is still alive, we believe in Resistance fighters and in our ‎people,” al-Manar quoted him as saying in an interview with Al-Nour radio station on ‎Tuesday.‎

‎“Throughout years we have developed our military capabilities, we are engaged in a war of ‎minds,” he said.‎

Israeli DM had a huge record of failure in south Lebanon during the occupation of Lebanon, ‎Nasrallah added.‎

The Resistance has created a balance of deterrence with the Zionist entity, and the enemy ‎believes in this, he said.‎

‎“‘Israel’ has been since 1982 plotting against Jordan, and today the scheme is represented ‎by the so-called ‘deal of the Century,” said the chief of Hezbollah, adding that ‘Israel’ aims to ‎occupy entire Palestine and according to this scheme, Jordan is an alternative home for the ‎Palestinian people.‎

Noting that ‘Israel’ is a racist entity and not a religious state, he said “I look forward to the ‎day when Israelis will go back to the countries they had come from, it’s just a matter of ‎time.”‎

‎“The direct US military presence in the region indicates weakness of its allies, and strength of ‎the Axis of Resistance,” he noted.‎

‎“‘Israel’ knows very well that any aggression on Lebanon won’t go unanswered since it ‎believes in rules of engagement set following 2006 July War,” he said, adding that level of ‎support by Palestinian people to the choice of Resistance is higher than before.‎

The equation today is that we retaliate to any attack on our fighters everywhere, he said.‎

Changing the tasks of UNIFIL in south Lebanon is an Israeli demand adopted by the US ‎administration, he said.‎

Imam Sayyid Musa al-Sadr said one day that the political sides who are ruling the country are ‎ready to ignite a civil war, and this issue is of great concern to Hezbollah, Sayyid Nasrallah ‎noted, adding that “We neither want a civil war nor want to rule the country.”‎

On the regional level, Sayyid Nasrallah assured that the US withdrawal from the region will be ‎on all political, cultural, and military levels.‎

He considered that the US is on its way to pack and leave the region due to several reasons ‎including the public desire in Iraq, their withdrawal from Afghanistan, their identification as ‎‎“occupation forces” in Syria, the failed war on Yemen, the unsuccessful “Deal of the Century” ‎which was signed by only one part of the agreement, and the developments in general.‎

Sayyid Nasrallah ruled out any war between the US and Iran or between Israel and Lebanon ‎‎“unless the former decided to make a stupid act,” he said. He finally noted that Israel might ‎cease to exist if the circumstances that it emerged on changed.‎