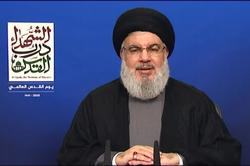 In a united address by leaders of Resistance movements on the occasion of Al-Quds Day, Sayyed Nasrallah told martyr Suleimani that the Resistance is preparing to pray in Al-Quds.

“This year, we miss martyr Hajj Qassem Suleimani. Hajj Qassem had worked throughout the day and the night to strengthen the Resistance and to liberate Al-Quds.”

“We promise him and all the other martyrs that the day when Al-Quds will be liberated is coming,” Sayyed Nasrallah said in the address which carried Hebrew subtitles in a clear message to the Israeli enemy.

Talking about the occasion, Sayyed Nasrallah said that Imam Ruhollah Khomeini declared Al-Quds Day as an annual occasion on the last Friday of Ramadan Holy month in a bid to voice Iran’s firm and decisive commitment to Palestine and Al-Quds.

“Today we are so close to liberate Al-Quds thanks to faith, steadfastness, patience and sincerity of Axis of Resistance’s powers.”

His eminence stressed that those who are seeking to normalize ties with the Zionist entity don’t represent the real image of the Muslim and Arab Ummah.

Sayyed Nasrallah noted that the Zionist officials are concerned over the military buildup of Resistance factions across Arab and Muslim countries.

“Zionist officials are scared of victories achieved by Axis of Resistance and astonished by defeat of the United States and its allies.”

The Hezbollah S.G. noted that Al-Quds Day coincides this year with the 20th anniversary of Resistance and Liberation Day (which falls on May 20), reiterating Hezbollah’s firm commitment to support the Palestinian cause.

“We in Hezbollah, pledge to stand by the oppressed people of Palestine.”