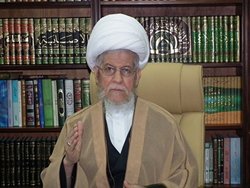 The prominent Lebanese Shi’ah scholar said, “Major General Soleymani is a prominent figure ‎in contemporary history who has made unprecedented and unparalleled achievements in the ‎fight against the Zionist regime and the United States.” ‎

RNA – Ayatollah Afif al-Nablusi, a prominent Lebanese Shi’ah scholar, issued a statement ‎offering his condolences on the martyrdom of Major General Qasem Soleymani and Abu ‎Mahdi al-Muhandis in an airstrike by American forces in Iraq. ‎

Oh children of the Islamic Resistance and freedom-loving nations of the world and dear ‎people of Iran! On this day, God Almighty chose Major General Qasem Soleymani, ‎the great revolutionary who stood up fought against the colonists, and Abu Mahdi al-‎Muhandis, the brave commander of Islam, for martyrdom.‎
‎ ‎
The martyred Major General Soleymani and his Iraqi companions sought martyrdom ‎and achieved it in a heroic manner and deserved martyrdom. ‎

On my own behalf, I offer my congratulates on the martyrdom of Major General ‎Soleymani and his Iraqi companions to the Supreme Leader of Iran’s Islamic ‎Revolution, Imam Sayyed Ali Khamenei, to Sayyed Hasan Nasrallah, and to the ‎people of Iran, Iraq, Palestine, Yemen and Syria. ‎

Major General Soleymani is a prominent figure in contemporary history who has ‎made unprecedented and unparalleled achievements in the fight against the Zionist ‎regime and the United States of America and has been able to impose many defeats ‎on them.‎
‎ ‎
All of the freedom-loving people in the world are waiting for the flames to rage ‎beneath the feet of the American occupation in Iraq and the valiant Iraqi warriors will ‎not sit down until the last occupation force leaves their country. ‎