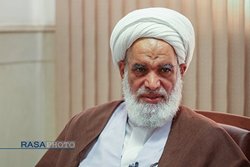 Ayatollah Ka’bi said, “The solution to the liberation of Palestine is to continue the school of ‎Martyr Qasem Soleymani, to pay attention to the leadership of the Islamic ummah, to take ‎inspiration from the culture of Ashura and some of the leading Palestinian jihadi movements.”‎

RNA – Today, one of the most important issues in the Islamic world and in the international ‎arena is the issue of Holy Quds and Palestine.‎

In this regard, the correspondent of Rasa News Agency’s political service had a detailed ‎conversation with Ayatollah Abbas Ka’bi, a member of the board of the Assembly of Experts ‎of the Leadership, part of which has been translated for our international readers:‎

Rasa: What is the place of the discussion of resistance and the struggle against Israel in the ‎jurisprudence of resistance?‎

Ayatollah Ka’bi: Palestine and al-Quds (Jerusalem) is an Islamic land that was taken from ‎the Palestinians as a result of British colonial planning and the Jewish Agency for Israel’s ‎program, and the fake nation of the Zionist regime was established in Palestine with a ruling ‎body and the Zionist regime.‎

The land, the people, the government and the sovereignty were all usurped as if they were ‎attacking someone’s house and occupying the house and evicting the landlord, then settling ‎in that house with all the supplies. The situation of the Zionist regime is as if a landlord ‎complains about his tenants and the usurpers order negotiations and the usurper stays in the ‎house.‎

Their work is usurpation, forgery, theft, murder, looting and crime. According to Islamic ‎principles, the duty of such a usurping, fake and self-proclaimed regime, which was created ‎by colonial design to usurp the Islamic land and encroach on the sacred, is clear.‎

Rasa: Does jihad with Israel have a place in Wahhabism?‎

Ayatollah Ka’bi: Regarding the issue of Daesh and Salafi jihad, in dividing Wahhabism into ‎court Wahhabism, missionary Wahhabism and jihadi Wahhabism or Salafi jihad, Daesh ‎considers themselves to be appointed to the Salafi jihad movement. According to Salafi ‎jihad, the liberation of Palestine and al-Quds and the end of the usurping state of Israel is a ‎religious obligation but the Israelis and the Americans have played them and changed their ‎ways, saying that you can fight the Shi’ahs first and then unite with the West.‎

In practice, they became mercenaries of the United States and Israel in the region, and to ‎form a security-belief belt, they began to work for the Zionist regime as an alternative jihadi ‎movement. Otherwise, al-Qaedah and the Salafi jihadi movement also consider the ‎destruction of the Zionist regime to be a religious obligation, therefore, if they refer to their ‎jurisprudence, they will have no choice but to decide to liberate Palestine and al-Quds.‎

Rasa: What are the requirements for the recapture of Palestine and the expulsion ‎of the Zionist regime and the global arrogance from the region?‎

Ayatollah Ka’bi: Naturally, the attempt to recapture and engage in a defensive jihad ‎against the Zionist regime has requirements, one of the requirements of which is to create a ‎deterrent force for Muslims. Muslims must be strengthened and the Islamic ummah must be ‎rebuilt so that the enemies don’t attack again and occupy any place.‎

The International al-Quds Day rallies are also a declaration of national resistance and ‎solidarity against the Zionist occupiers and these rallies are obligatory and are a defensive ‎jihad. Today, the resistance axis has been formed in Lebanon, Syria, Iraq, Yemen, Bahrain ‎and various parts of the Islamic lands, focusing on the liberation of Palestine and al-Quds. ‎

Even the proposal made by the Supreme Leader of the Islamic Revolution, Ayatollah Sayyed ‎Ali Khamenei, as a free referendum in the Occupied Territories is based on the rule of the ‎jurisprudential requirement of qa’idah al-ilzam which states “oblige opponents to what they ‎accept themselves,” which means they project themselves as adhering to democracy.‎

Rasa: Emphasizing on Ayatollah Khamenei’s proposal on the Palestinian people’s right to ‎vote, what is the current solution to the liberation of al-Quds and Palestine?‎

Ayatollah Ka’bi: The solution to the liberation of Palestine and the liberation of al-Quds is ‎based on the continuation of the school of Martyr Qasem Soleymani and attention to the ‎leadership of the Islamic ummah and the regeneration of the Islamic ummah and taking ‎inspiration from the culture of Ashura and some Palestinian jihadi movements such as the ‎Islamic Jihad movement founded by Martyr Fathi Shaqaqi. ‎

They believe that Martyr Fathi Shaqaqi, after reading the maqtal, the story of the murder of ‎the Master of the Martyrs, Imam al-Husayn, set out on this path which is the path to liberate ‎Palestine and al-Quds is to follow the school of Ashura.‎