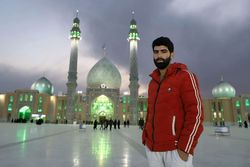 On the eve of al-Quds Day, Saif Ali Budgami emphasized the similarities between the Israeli ‎occupation of Palestine and the Indian occupation of Kashmir.

RNA – In an interview with Saif Ali Budgami, an activist in Indian-occupied Kashmir, ‎said, “International al-Quds Day is the name of the voice of voiceless, the hope of the ‎hopeless, the help of the helpless, the identity of the unidentified, the courage of the ‎discouraged, the consolation of the bereaved, the strength of the weak, the weapon of the ‎oppressed. al-Quds Day is the name of the path of resistance, the day of struggle and is ‎truly the day of victory for the tyrannized people around the world.”‎

He explained that al-Quds Day was originally established by Imam Ruhollah Khomeyni, the ‎Leader of the 1979 Islamic Revolution in Iran, who declared the last Friday of the holy ‎month of Ramadhan as International al-Quds Day. It is an annual anti-Zionist day of protest ‎in which Muslims around the world unite in solidarity against oppression and tyranny, ‎especially regarding the illegal occupation of Palestine by Israel. He declared the liberation of ‎al-Quds (the first qiblah of the Muslims) as a religious duty upon all Muslims. al-Quds Day is ‎an international day and is not limited and exclusive to al-Quds or Palestine but rather it is a ‎day to defend the tyrannized around the world, be it in Palestine, Kashmir or any other ‎tyrannized region. This is the day for the oppressed to rise up against the arrogant ‎oppressors to defeat them.‎

He said, “International al-Quds Day is the cry of the oppressed and tyrannized ones against ‎all forms and manifestations of injustice, tyranny and oppression. Although it is held for only ‎one day and has a specific symbol, this event has a general message with multiple aspects. ‎al-Quds is an international religious symbol for Muslims around the world. Its suffering ‎reflects the reality of tyranny and oppression of which many people and communities, at ‎different times and ages, are enduring. It reflects the reality of the ongoing conflict between ‎the oppressors and the oppressed ones which has been referred to in the Holy Quran.”‎

Mr. Budgami continued, “We, as Muslims live in this reality every single day, with different ‎aspects and approaches. We have a constant need to understand the concepts of the ‎conflict, its goals and objectives, its causes, its facts, its consequences across history. We ‎must not rely on the present, which might draw a false image of it.”‎

The Kashmiri activist said, “al-Quds Day is like the adhan (the call to prayer) that invites ‎people to the mosque for salah (prayer). Similarly. al-Quds Day invites and attracts all ‎Muslims to assemble and protest against the oppression of oppressors. This day may take ‎adorn Kashmir with blooming and enshrined revolutionary buds. Its existence and influence, ‎if not limited may erase all sorts of black chapters from the book of the Kashmir Valley. This ‎land, which is thirsty for unity, needs such demonstrators to pinch to facilitate its needs ‎during the resistance movement.”‎

He emphasized that this day must not be considered just a day for al-Quds but the day of ‎Islam, the day of raising Islamic banners calling for unity and Islamic governance, against ‎Zionism, the illegal invasion and occupation of Kashmir and Palestine and other oppressed ‎nations. Through my observations and experiences, some reputed Islamic scholars in the ‎Kashmir Valley neglect this day and keep it limited to the Palestinians. ‎

‎“On the other hand, hundreds of thousands of Kashmiri people observe al-Quds with great ‎esteem but neglect Kashmir issue. Be sure both categories are an approach in the wrong ‎direction. Both nations should struggle hand in hand with the highest solidarity with one ‎another. The true believer is one who feels the pain in the east, of injuries of a believer in ‎the east,” he told Rasa News Agency.‎

Mr. Budgami said, “There is no doubt that International Day of al-Quds, which coincides with ‎the last Friday of the holy month of Ramadhan every year, involves significant semantics and ‎symbolic and spiritual concepts related to one of the most important issues that holds ‎significant concern by the general Islamic world, among which the revelation of Holy Quran, ‎the best guide for humankind is narrated, as well as those supporting and advocating for ‎humanity, the values of truth, justice and victory for the oppressed and tyrannized ones. ‎Furthermore, the day should be kept alive not by excluding Palestine but by also including ‎Kashmir because both nations share many more similarities than differences and must unite ‎to liberate themselves from the illegal occupations of Israel and India.”‎

In this regard, he said, “We Kashmiri and Palestinian people are treated as second class ‎citizens in our own lands, Kashmir and Palestine are among the most militarized regions in ‎the world, both regions have lived under military occupation since 1947 and people are ‎forced to travel through military checkpoints in order to move almost everywhere, including ‎commuting to work.”‎

He said, “Therefore, the small but growing pockets of solidarity expressed for us Kashmiris is ‎equivalent to international solidarity for the Palestinian struggle. Joining the dots between the ‎occupation of Kashmir and Palestine shows the need for greater solidarity between the two ‎independent freedom struggles. The resistant Kashmiri people should not observe this day ‎just for the Palestinian cause but rather Kashmir should be adorned similarly to Palestine, as ‎when growing up Kashmiri children also watched the ever-increasing graveyards being ‎adorned. We too have a similar history as we have suffered under the brutal occupation by ‎India and the stories of the dead can not be silenced. Torture and death can be buried no ‎longer.”‎

Mr. Budgami stressed, “People, who mark al-Quds Day in Kashmir in memory of Palestine ‎and exclude Kashmir means to leave the dead body unburied and commemorate the death ‎anniversary of the buried. Therefore, the Kashmiri people must not ignore Kashmir and ‎support Palestine separately, rather they should unitedly oppose the similar occupiers. This ‎is the day to warn the Zionist powers under any form of government – whether democracy ‎or dictatorship – to end their illegal occupation. This day must be used as a means of ‎struggle and the path of resistance in Kashmir as well.”‎

He added, “al-Quds Day is a day to heal the injured, console the bereaved, encourage the ‎weak, reward the martyrs, award the fighters and punish the cruel. al-Quds Day is a day of ‎unity against evil and oppressors to rub their nose in the dirt. The day surely distinguishes ‎the hypocrites from the true believers as true believers acknowledge accordingly and rise up ‎against Zionist domination and the hypocrites enjoy luxuries under the shadow of Zionism. ‎Amongst the greatest jihad is a word of justice in front of a tyrant.”‎

‎“In conclusion,” he said, “We must send thousands of salutations to the personality who ‎constructed the base of the Islamic Revolution and gifted this day to the oppressed. It has ‎been a day to make a global call for resistance and uprising to regain the rights of the ‎deprived. This is the day of justice and the day of salvation from oppression and we hope ‎this holy day could be the day of victory from the tyranny, oppression and illegal occupation ‎for Palestine and Kashmir as well.”‎

Kashmiri activist in an exclusive interview with RNA: