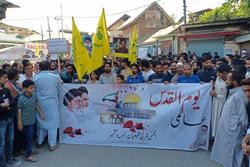 Rasa – Saif Ali Budgami told Rasa News Agency on International al-Quds Day, the Kashmir ‎Valley witnessed widespread protests in Kashmir against the illegal occupation of Palestine, ‎Kashmir and in support of all the oppressed people of the world.‎

RNA – In an exclusive interview with Rasa News Agency, Saif Ali Budgami, a citizen of Indian-‎ouccpied Kashmir, said, on May 31st, the last Friday of the holy month of Ramadhan, ‎thousands of people took to the streets to mark International al-Quds Day in Kashmir. The ‎protests took place in support of Palestine and other oppressed people, particularly against ‎the global oppressors, including Israel and the United States.‎

The protests were showered with various slogans, including “Down with Israel,” “Down with ‎the United States,” “Free Palestine,” “Remove Israel,” “Oh oppressors! Leave our first ‎qiblah!” as well as slogans referring to the liberation of Kashmir, such as “Free Kashmir! We ‎want Freedom!”‎

It’s to be noted International al-Quds Day was first suggested by the late founder of Islamic ‎Revolution in Iran, Imam Khomeyni. He urged Muslims around the world to observe the last ‎Friday of holy month of Ramadhan as al-Quds Day against the illegal occupation of ‎Jerusalem al-Quds and Palestine by Israel and other oppressed people of the world. ‎Jerusalem al-Quds is the first qiblah for Muslims. ‎

Shaykh Ghulam-Husayn Matoo, the head of Mutahhari Fikri wa Saqafati Markaz, a religious ‎organization in Srinagar, said, “This day is a platform for all oppressed people to unite ‎against the so-called superpowers of the world in order to get eliminate their continuous ‎oppression.” ‎

Wilayat Ali, a protester from Tengan Rakhshalnia, said, “International al-Quds Day is a day ‎of standing with world oppressed people. May it be Kashmir, Palestine or other oppressed ‎areas, even if the victims and oppressed people aren’t Muslim, it’s obligatory to stand with ‎them as well. The motive of this rally today was held on this position.”‎

Many witnesses rose their voices against the oppressive powers of the world, including the ‎House of Saud in Saudi Arabia, the Buhari regime in Nigeria and the House of Khalifah in ‎Bahrain, whom protesters blamed for their acts of murder, oppression, starvation and ‎systems of government. ‎

Agha Sayyed Hasan al-Musawi al-Safawi, the leader of the Hurriyat Conference, said, “This ‎day is a golden gift from Ayatollah Khomeyni and the Islamic Revolution who initiated this ‎day to oppose the Zionist systems of Israel and the United States and their allies against the ‎killings, torture and murder in Palestine since the illegal occupation began.”‎

Simultaneously in many places, many small children were witnessed demonstrating by setting ‎posters carrying the images of Benjamin Netanyahu and Donald Trump on fire and kicking ‎them and naming them the two most wanted global terrorists.‎

Shaykh Ghulam-Husayn Joo, the Friday prayer leader of Tengan Budgam, added, “This day ‎isn’t only limited to Jerusalem al-Quds or Palestine but was the day of Kashmir as well. As ‎Kashmiris, we must really care for Jerusalem al-Quds because it’s considered as ‘the House ‎of God.’ It’s our first qiblah but at the same time we must stand for Kashmir as well. It’s ‎simply a guide for the resistance of the oppressed people of the world. In addition, this day ‎was observed in most of the countries of the world wherein the people demanded the ‎complete liberation of Jerusalem al-Quds‏ ‏and Palestine and end of the Zionist oppression and ‎illegal occupation of Palestine.”‎