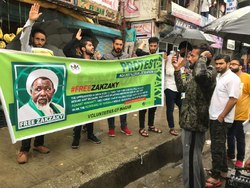 RNA – In an exclusive discussion with Rasa News Agency, Saif Ali Budgami stated that a ‎‎“Free Zakzaky” protest rally was held in the town of Magam in ‎the Budgam district of Indian-‎occupied Kashmir on July ‎‏2‏‎5th.‎

The rally was organized by the Magam ‎division of the Nasl-e-Inqilab Kashmir, a voluntary ‎‎student-based social organization and was held on the route between Government Boys ‎Higher Secondary School to the Magam bus stand.‎

The volunteers held the peaceful protest to demand the immediate release of the head of ‎the Islamic Movement of Nigeria, Shaykh Ibrahim Zakzaky, despite the heavy rain in the ‎Kashmir Valley. ‎

Shaykh Zakzaky has been under illegal detention for the past fours years and witnesses say ‎‎that he is in critical condition due to the injuries inflicted upon him in the 2015 attack by the ‎‎Nigerian army‏ ‏following a rally marking International al-Quds Day in support of the ‎Palestinian people. ‎

The cleric’s son, Muhammad, said that his father was in dire need of medical treatment‎ and ‎‎hadn’t received treatment in prison. If he isn’t treated, he could die as “large and dangerous ‎‎quantities of lead and cadmium have been found in his blood.” ‎
‎ ‎
In Magam, protesters carried placards on which they had written famous quotes by Shaykh ‎Zakzaky, one of which stated, “We are ready to die with honour than to be ruled by the ‎illegal, corrupt and evil government of Nigeria.” ‎

Irfan Husayn, one of the protesters, stated, “We protest against the brutal, illegal and ‎corrupt system of Nigeria which massacred 347 members of the Islamic Movement of ‎Nigeria, including six of Shaykh Zakzaky’s sons. They attacked him while he was in the ‎husayniyah, then imprisoned him along with his wife. They have been in prison since ‎December 12, 2015. After spending years in jail, he’s currently in critical condition and is living ‎his last moments and the Nigerian government isn’t allowing him to consult a doctor or ‎receive medical treatment.”

Many protesters were seen denouncing international human rights organizations and blamed ‎them of being silent spectators in the face of this heinous crime.‎
‎ ‎
‎“Nasl-e-Inqilab Kashmir will be holding uninterrupted demonstrations until Shaykh Zakzaky is ‎released,” the leader of the protest added.‎