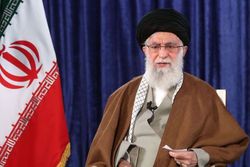 RNA – The Supreme Leader of the Islamic Revolution Ayatollah Sayyed Ali Khamenei is to ‎deliver a speech on the occasion of International al-Quds Day.‎

RNA – Ayatollah Khamenei’s speech on Friday will be aired live on local and international radio and ‎television channels.‎

Every year on International al-Quds Day, millions of Muslims hold rallies worldwide to ‎reaffirm their call for the liberation of Israeli-occupied Palestinian territories and denounce the ‎Tel Aviv regime’s acts of aggression against the Palestinian people.‎

However, this year, street demonstrations have been canceled in Iran due to the coronavirus ‎pandemic and replaced by online events.‎

He said al-Quds Day will take place without its usual annual rallies and will instead be held ‎within the perimeters of Friday prayers, which coincide with al-Quds Day.‎

The late founder of the Islamic Republic, Imam Khomeini, designated the last Friday of the ‎holy fasting month of Ramadan as al-Quds Day to mark solidarity with the Palestinian cause.‎

The event, which is marked worldwide, is viewed as an opportunity for all freedom-seeking ‎nations of the world to express their outrage at the Israeli regime for its decades-long ‎occupation of Palestinian territories.‎

In December 2017, Trump officially declared the disputed city of Jerusalem al-al-Quds as ‎Israel's capital, despite warnings from around the world that the measure risks triggering a ‎fresh wave of violence in the Middle East.‎

In January, Trump alongside Israeli Prime Minister Benjamin Netanyahu also unveiled the so-‎called deal of the century without the presence of Palestinians. ‎

The scheme calls for the creation of a Palestinian state with limited control over its own ‎security and borders. It also bars Palestinian refugees from returning to their homeland, ‎enshrines Jerusalem al-al-Quds as “Israel’s undivided capital” and allows the regime to annex ‎settlements and the Jordan Valley.‎

The al-Quds Day Commemoration Committee in cooperation with the Islamic Radios and ‎Televisions Union (IRTVU) is scheduled to hold a virtual speech ceremony for the leaders of ‎the Palestinian resistance front and various personalities on Wednesday.‎

The speakers are as follows:‎