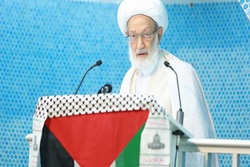 Bahrain’s most prominent Shi’ah cleric underlined the need for all ‎Muslims’ assistance and continuation of the path of jihad for the victory of the Islamic ‎Resistance Axis.‎

RNA – Bahrain’s most prominent Shi’ah cleric, Ayatollah Isa Qasim underlined the need for all ‎Muslims’ assistance and continuation of the path of jihad for the victory of the Islamic ‎Resistance Axis.‎

Addressing an international congress on the holy city of al-Quds (Jerusalem) on Monday ‎evening, Ayatollah Qasim said Islamic unity is necessary for the Muslim world victory.‎

Scattered measures won’t lead to results, he said, stressing the need for abandoning ‎sectarian differences in favour of the Islamic ummah’s interests. ‎

The senior cleric also criticized those seeking normalization of ties with the Zionist regime of ‎Israel, underlining the continuation of the path of Jihad.‎

The international congress featuring the holy city of al-Quds (Jerusalem) is held on Monday ‎and Tuesday via videoconference.‎

It has been organized ahead of the International al-Quds Day.‎

Scholars and political figures from 18 countries deliver speeches at the international event.‎

The International al-Quds Day is a legacy of the late founder of the Islamic Republic, Imam ‎Khomeini, who designated the day in solidarity with Palestinians.‎

Since the 1979 Islamic Revolution in Iran, the International al-Quds Day has been held ‎worldwide on the last Friday of the Muslim fasting month of Ramadan.‎

This year, International al-Quds Day falls on Friday, May 22.‎