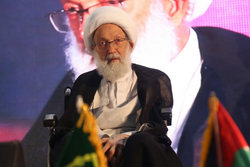 Bahrain’s most prominent Shi’ah cleric Ayatollah Isa Qasim said the Bahraini people will ‎continue their political struggle until their rights are recognized by the rulers.‎

RNA – Bahrain’s most prominent Shi’ah cleric Ayatollah Isa Qasim said the Bahraini people ‎will continue their political struggle until their rights are recognized by the rulers.‎

In a statement on Tuesday, the senior cleric said Bahrainis’ political struggle continues with ‎the most peaceful means, the Bahrain Mirror website reported.‎

‎“The Bahraini government has filled its prisons with political activists and opposition groups ‎and its courts issue unjust verdicts against them,” he said.‎

Ayatollah Qasim emphasized the need for establishment of just relations between the ‎national and the government and recognition of the people’s rights.‎

Bahrain has seen anti-regime protests over the past nine years. The major demand has been ‎the ouster of the Al Khalifah regime and establishment of a just and conclusive system ‎representing all Bahraini nationals.‎

The Manamah regime, in return, has ignored the calls and is pressing ahead with its heavy-‎handed crackdown and persecution of human rights campaigners and political dissidents.‎