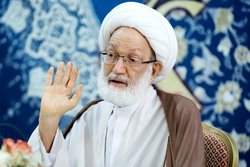 Speaking at the first international conference of the Fatimiyun Brigades, the leader of the ‎Islamic Movement of Bahrain said, “The Fatimiyun Brigades of Afghanistan sacrificed their ‎lives and didn’t harm and what they achieved with their martyrdom isn’t equal to the good of ‎the whole world but rather more than that.”‎

RNA – Speaking at the First International Conference on the Fatimiyun Brigades of ‎Afghanistan which was held tonight in the Holy Shrine of Imam al-Ridha in accordance with ‎the hygiene protocols, Ayatollah Isa Qasim, the leader of the Islamic Movement of Bahrain, ‎said, “Martyrdom-seeking jihadi roles have played a role in defending religion, sanctities, lands ‎and unity.”‎

The Bahraini scholar emphasized that the Fatimiyun Brigades subdued the Zionist enemy and ‎American pride and stated, “The Fatimiyun Brigades played an important role in resolutely ‎resisting projects aimed at dispersing the ummah and occupying lands, distorting its identity ‎and changing certainties.”‎

He stated, “The youth of the Fatimiyun Brigades sacrificed their dear and honourable souls in ‎order to protect the millions of innocent people with pure hearts and to protect the security ‎of the people from the hands of criminals.”‎

Ayatollah Qasim continued, “The Fatimiyun Brigades sacrificed their lives and didn’t harm and ‎what they achieved with their martyrdom isn’t equal to the good of the whole world but ‎rather more than that.”‎

Referring to the position of the warriors, His Eminence referred to Surah al-Anfal [Chapter of ‎The Bounties], verse 60, which says, “Prepare against them whatever you can of [military] ‎power and war-horses, awing thereby the enemy of God, and your enemy, and others ‎besides them, whom you do not know, but God knows them. And whatever you spend in ‎the way of God will be repaid to you in full, and you will not be wronged.”‎

Addressing the warriors of the Fatimiyun Brigades, he said, “Resist and stand firm against the ‎projects that intend to disperse and divide the Islamic ummah and occupy the land and ‎distort the identity and change the beliefs of the Zionist and American enemies. May God ‎Almighty reward the warriors for the sake of God.” ‎

It’s worth mentioning that the First International Conference on the Fatimiyun Brigades of ‎Afghanistan was held in regard to the subjects of “honouring the martyrs of the Fatimiyun ‎Brigades” and “the liberation of al-Quds (Jerusalem) and the withdrawal of the United States ‎from the region” by the International Front of the Youth of the Islamic Resistance alongside ‎the Fatimiyun Brigades and the Holy Shrine of Imam al-Ridha on August 13 in accordance ‎with the health protocols of the National Headquarters for Combating the Coronavirus at ‎Imam al-Ridha.‎