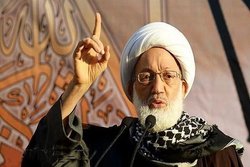 RNA – Hujjat al-Islam Isa Qasim, the leader of Bahrain’s oppressed Shi’ah community, said ‎International al-Quds Day belongs to the al-Aqsa Mosque, al-Quds, Palestine and the entire Islamic ‎ummah, adding, “All those who left this path and conspired must be separated from the ‎Islamic ummah.”‎

‎“What is expressed in the al-Quds day is deep understanding, a clear Islamic issue, a ‎perspective of future of politics, sense of responsibility, and unique bravery and flawless ‎move of Muslims,” Hujjat al-Islam Qasim said in a speech.‎

He said the day was wisely named by Imam Khomeyni who was a great saviour, insightful ‎politician, learned religious scholar, and the leader of the Islamic Revolution in Iran.‎

He added that proclamation of International al-Quds Day was a necessity in the past, but ‎now it has changed into resurrection to revive and safeguard the Islamic ummah and fight ‎whatever that threatens and intends to weaken the unity of the ummah in order to impose ‎itself on the Islamic countries and their interests.‎