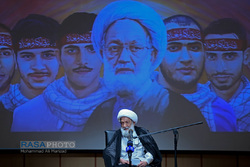 The leader of the Bahraini Shiites maintained, “The Deal of the Century is the challenge of choosing between freedom and base acceptance of a deal that together with Manama meeting is to test the zeal of the Islamic Ummah.”

RNA - Ayatollah Sheikh Isa Qasim, the leader of the Bahraini Shiites, delivering a speech to the International Meeting of the Resistance Youth, held in the presence of the youth coming from 60 countries in Qom, stated, “The meaning of the Deal of the Century is abandoning the dignity and religion, and the deal together with Manama meeting form a crime testing the vigilance and zeal of the Islamic Ummah.”

The leader of the Bahrain Shiite reiterated, “There are two options regarding the Deal, either freedom or basely acceptance of it; however, the US and its allies should know that the only choice the Islamic Ummah makes against this Zionist project is Resistance, Resistance and Resistance.”

Ayatollah Isa Qasim stated that the Islamic Ummah will retain the whole domain of the world of Islam by putting up resistance, freedom is its only choice and it never loses its dignity and faith.

It should be mentioned that Manama Meeting is being held for two days and it is claimed to be aimed at fundraising for investment in the Palestinian lands and providing the Palestinians with the low-interest loans.

According to many experts, Manama Meeting is being held as a prelude to Trump’s Deal of the Century, proposed by Jared Kushner.