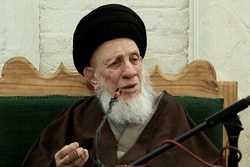 A source of emulation, based in Najaf, stated that social communications reinforce and advance the human concepts.

According to the correspondent of Rasa News Agency in Najaf Ashraf, Romania’s ambassador in Baghdad, Jacob Brad, met Ayatollah Sayyed Muhammad Saeed Hakim, a source of emulation, based in Najaf.

In the course of the visit, Ayatollah Hakim said, “The religious sources of emulation who are based in Najaf played an influential part in the reinforcement of the human and communicative concepts. Communications among people should not be impacted by political and individual interests, right human concepts should be promoted in society and cooperation among people ought to be encouraged.”

The Romanian ambassador, expressing pleasure over the trip to Najaf Ashraf and visiting the source of emulation, said, “The religious sources of emulation are the spiritual fathers of the Iraqi society.”

Moreover, Jacob Brad visited the holy shrine of Imam Ali (AS) and said that the atmosphere and spirit of this shrine are totally different from the ones in other religions’ sacred sites, especially those belonging to the Christianity.”