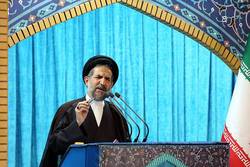 RNA - Addressing a large and fervent congregation of the people in Tehran on Friday, Hojjatoleslam Aboutorabifard said, "The message of this brave move was that the Iranian Armed Forces are ready to pull the trigger in case of any aggression against Iran from air, land or sea."

The senior cleric also hailed the Iranian people, Armed Forces, and government for their unity vis-à-vis the attempts by the aggressors.

The IRGC shot down a US Navy RQ-4A global Hawk drone that had entered Iranian airspace in the Persian Gulf region to gather intelligence on June 20, using Sevom Khordad indigenous surface-to-air missile system.

Also on June 20, Iranian Foreign Minister Mohammad Javad Zarif said that his country had retrieved parts of the US Global Hawk that was shot down from the country's territorial waters, rejecting Washington's claim that the aircraft was targeted in international waters.

"(The) US drone took off from the UAE in stealth mode and violated Iranian airspace," Zarif wrote on Twitter, adding that the Global Hawk drone "was targeted near... Kouh-e Mobarak" region in the Central district of Jask in Hormuzgan province after the aircraft violated Iran's airspace.

Meantime, General Salami stressed that the move should alert Washington officials to stay away.