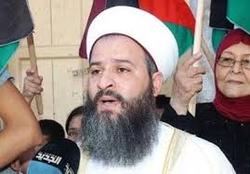 The member of the Lebanese Muslim Scholars Association said, “No one is allowed to negotiate on the behalf of the Palestinian people, and Manama Meeting demonstrated how the heads of Arab states follow what the US dictates.”

Sheikh Khizr al-Kibish, the member of the Lebanese Muslim Scholars Association, in an interview with Rasa News Agency, pointing to Manama Meeting, stated, “This session, as the first step of the Deal of the Century, was utterly futile, and the allies of the US should know that all the Palestinian people are against this deal.”

He reiterated, “No one is allowed to negotiate on the behalf of the Palestinian people, as Manama Meeting only dealt with the economic dimension of Palestine, neglecting the political aspects, and it demonstrated how the heads of Arab states follow what Washington dictates.”

Sheikh Khizr al-Kibish continued, “Normalisation of tie between Arab countries and the Zionist Regime only benefits this Regime, and the Arab States earn nothing from such links, as Oslo, Madrid, Camp David meetings had nothing for them.”

He maintained, “Mahmoud Abbas is supposed to commence a new intifada and stop security cooperation with the Zionist Regime, as the Palestinian people follow their targets and combats through putting up resistance and holding the March of Return.”

Sheikh Khizr al-Kibish finally stated, “The Scholars of the Islamic Ummah should confront any Takfiri and heretical positions that benefit the Zionist Regime and invite the youth of Arab and Muslim countries to reinforce the fronts against the Zionist Regime.”