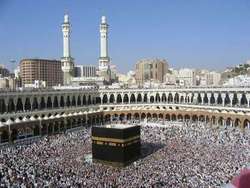 The custodian organization of Imam Ali (AS) holy shrine held the annual ceremony of the compulsory and non-compulsory hajj.

According to the correspondent of Rasa News Agency in the holy city of Najaf, the annual ceremony of the compulsory and non-compulsory hajj, held for the clerics of the hajj caravans was held by the custodian organization of Imam Ali (AS) holy shrine.

The chairman of the Iraqi Hajj Supreme Council, Hujjat al-Islam Khalid al-Atiya, a top official of Hajj organisation, Sheikh Abd as-Sadda al-Jaberi, and a group of scholars, seminary students and clerics of the compulsory and non-compulsory hajj caravans attended the ceremony.

Hujjat al-Islam Sheikh Abd as-Sadda al-Jaberi, making a speech in the ceremony, stated, “This convention is held for the preparation of the clerics working in hajj caravans who are to travel to Saudi Arabia in the hajj time.”

He added, “It is a highly significant ceremony held in the presence of the clerics of hajj caravans, including both male and female missionaries. The ceremony emphasizes the elaboration of religious orders and rules in the time of hajj.”