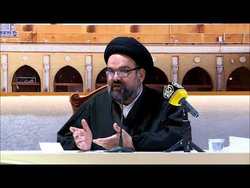 The chairman of the Iraqi Islamic Guidance Organisation explicated the selection process of Hajj clerics in the annual convention of Hajj, held in Imam Ali (AS) holy shrine.

According to the correspondent of Rasa News Agency in the holy city of Najaf, Hujjat al-Islam Abd as-Sattar al-Jaberi, the director general of the Iraqi Islamic Guidance Organisation, speaking in the annual convention of the compulsory and non-compulsory Hajj, held in Fatima Zahra (S) courtyard of Imam Ali (AS) holy shrine, said, “The Islamic Organisation has set some criteria for the selection of the clerics and the comrades of Hajj caravans, and in case of meeting the criteria and selection, the clerics and their activities will be observed by scholars and seminary teachers.”

He added, “Clerics and missionaries are required to have passed the first phase of admission to the Iraqi seminaries, have experienced non-compulsory Hajj at least two times, and then they should successfully pass the examinations of the Supreme Council of Hajj”.

Hujjat al-Islam Sayyed Abd as-Sattar al-Jaberi finally maintained, “Holding the spiritual and religious programs, providing the clerics and missionaries with guidelines on how to explain religious orders and rules, religious obligations and how to manage Hajj caravans are some arrangements made for the education of the employed clerics.”