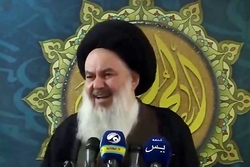 Baghdad Friday prayer leader, Ayatollah Sayyed Yasin Mousavi, saying that some Arab states of the region are going to sell Palestine using their own money, stated, “The deal of the century is to give the Zionist Regime the key to becoming the power of the region.”

RAN - Baghdad Friday prayer leader, Ayatollah Sayyed Yasin Mousavi stated, “The conditions of the region are so critical, and we should be vigilant in this regard. An important issue is the economic meeting held recently in Manama, it was aimed at giving Palestine and the key to becoming the power of the region to the Zionist Regime.”

Baghdad Friday prayer leader pointed out, “Although Russians and Chinese didn’t participate in the said meeting due to the absence of the Palestinians, some Arab states, like Saudi Arabia and Bahrain, attended the meeting, as they have decided to sell Palestine to Israel.”

Ayatollah Mousavi Added, “Arab states have adopted a weak position towards Palestine, as they are weak and only capable of fighting against the destitute nations such as Yemeni people and massacring them, similar to what they did to Syria and its people.”

Baghdad Friday prayer leader finally maintained, “The US attempts to sever the links between nations, such Iraqi people, and the issues of other countries in order to convert them to its own mercenaries, like Saudi regime.”