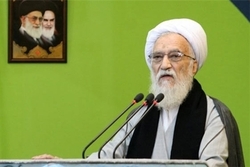 Tehran's provisional Friday Prayers Leader Ayatollah Mohammad Ali Movahedi Kermani blasted the US for its rhetoric against the Islamic Republic, and said that Tehran needs enriched uranium to overcome its electricity shortages.

RNA - Addressing a large and fervent congregation of the people in Tehran on Friday, Ayatollah Movahedi Kermani said, "Iran will keep on its uranium enrichment to generate electricity and not for producing atomic bomb, because Iran neither considers atomic bomb as legitimate nor needs it."

The senior cleric pointed to Iran's decision to reduce obligations regarding the 2015 nuclear deal, known as the Joint Comprehensive Plan of Action (JCPOA), and said that if the European partners to the deal fail to comply with their commitments, "Iran will continue to increase its uranium stockpiles".

As part of the first phase of scaling down its commitments, Iran exceeded the 300-kilogram limit set by the JCPOA on its low-enriched uranium stockpiles.

Iran is set to begin the second phase on July 7, the day when the 60-day deadline it had given the Europeans will be over.

In the second phase, Iran’s Arak heavy water nuclear reactor — which was agreed to be redesigned under the agreement — will resume its previous activities.

Iran will also increase the level of its uranium enrichment, and will no longer stick to the 3.67% limit it had agreed upon in JCPOA.

The moves, Iran says, are aimed at prompting the Europeans to honor their end of the bargain.

Britain, France, and Germany in January introduced a special trade mechanism, known as the Instrument in Support of Trade Exchanges (Instex), in order to facilitate doing business with Tehran in the face of the US sanctions.

However, Zarif says INSTEX, which is yet to be fully operational, is just a prelude to implementation of 11 commitments the Europeans have undertaken to save the JCPOA.

These include Iran’s oil sales, which the US has been trying to block through the sanctions, secure financial returns from the sales and investment in Iran, as well as facilitation of transport, aviation, and shipping activities involving the country, he said on Wednesday.

The JCPOA obliges the European partners to prove their commitment to the nuclear deal in action, Zarif said, adding that the Islamic Republic would commit to the agreement in exactly the same way as those countries would.

On Wednesday, echoing the same position, Iranian Foreign Ministry Spokesman Seyed Abbas Mousavi said that Tehran will remain committed to the nuclear deal to the extent that the European countries implement their undertakings.

"We will remain committed to the JCPAO as long as you do," Mousavi said in response to the remarks made by his French counterpart Agnes von der Muhll.

"We will fulfill our commitments under the JCPOA exactly in the same way you do," he underlined.

Responding to Tehran’s announcement that it will boost uranium enrichment levels, French Foreign Ministry Spokeswoman Agnes Von der Muhll said Iran will gain nothing by departing from the terms of its nuclear agreement.

“Putting it (the deal) into question will only increase the already heightened tensions in the region," she said.

That’s why France with its European partners have asked strongly that Iran reverse the excess enrichment without delay and refrain from further measures that undermine its nuclear commitments, Von der Muhll said.

Earlier on Wednesday, Iranian President Hassan Rouhani blasted the European states for offering a futile INSTEX to Tehran, stressing that his country would definitely take more steps to modify its nuclear deal undertakings to bring his nation's merits and obligations into balance.

"The Islamic Republic of Iran's patience has been interpreted by some world leaders as a strategic patience and today, after one year, giving up certain reversible undertakings (by Iran) cannot be protested," President Rouhani said, addressing a cabinet meeting in Tehran.

He described the INSTEX as a theatrical move by the Europeans, and said, "Today, INSTEX is just a mechanism empty of cash and an empty INSTEX is of no use at all, but if the INSTEX becomes operational and Iran's crude revenues can be retrieved through it, we can accept it to some extent irrespective of its shortcomings."

President Rouhani warned if Europeans choose to avoid practical steps, Iran will further modify its nuclear deal undertakings from July 7. "The level of Iran's enrichment will not be limited to 3.67% anymore from July 7 and this undertaking will be called off and we will enhance the (enrichment) level to the extent we need."

"If the other sides avoid complying with all their undertakings based on the timeline, from July 7, the Arak (heavy water) reactor will also return to its previous conditions, the conditions that they (the West) claimed was dangerous as it could produce (a larger volume of) plutonium, unless they abide by all their obligations with regard to the Arak reactor," he added.

"Iran advises Europe and the US to get back to logic, the negotiating table, understanding, respect for law and respect for the UN Security Council resolutions, which means that everyone should act based on the nuclear deal," President Rouhani said.

He, meantime, said that the measures Iran is adopting due to the other sides' disloyalty to their nuclear deal obligations are all reversible, and added, "Iran never intends to show willfulness towards others and violate the agreement."

The Iranian president said that the country's move to exceed the 300-kg limit for its enriched uranium stockpile was aimed at protecting the nuclear deal and persuading others to remain committed to their undertakings. If the other side proves its loyalty to the deal, Tehran will also rapidly return to the previous conditions and will sell its excess enriched uranium to Russia in return for yellow cake, he continued.

He also referred to Iran's warning to exceed the 130-ton limit for its heavy water stockpile, and said, "If the terms of the (nuclear) agreement are respected, a return to a figure less than 130 tons could be done fast."

Germany, France and the UK, the three European signatories to the Iran nuclear deal of 2015, created a Special Purpose Vehicle (SPV) for trade with Iran called the INSTEX late in January. The channel hasn’t had any financial transaction with Iran yet.

Exactly one year after President Donald Trump unilaterally withdrew from the nuclear deal, Iran announced it will scale down parts of its commitments within the pact, giving Europe 60 days to either normalize economic ties with Iran or accept the modification of Tehran’s obligations under the agreement.

Then on Friday, Secretary General of the European External Action Service (EEAS) Helga Schmid announced that INSTEX has become operational.

"INSTEX now operational, first transactions being processed and more EU Members States to join. Good progress on Arak and Fordow projects," Schmid wrote on her twitter account on Friday after a meeting of the Joint Commission on JCPOA ended in Vienna following three and a half hours of talks by the remaining signatories to the deal (the EU3 and Russia and China).

According to Fars News Agancy, it was the 12th meeting of the Joint Commission on JCPOA in Vienna.

“It was a step forward, but it is still not enough and not meeting Iran’s expectations,” said Araqchi, who headed the Iranian delegation at the JCPOA joint commission meeting in Vienna on Friday afternoon.

“I will report back to Tehran and the final decision will be by Tehran to take,” he added.