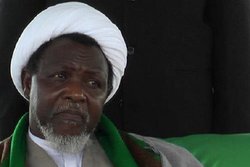 Members of Islamic Movement in Nigeria (IMN) said last week that the cleric was poisoned in prison and requires urgent medical care abroad.

Sheikh Zakzaky, who is in his mid-sixties, lost his left eyesight in a 2015 raid by security forces that left more than 300 of his followers and three of his sons dead. His wife also sustained serious wounds.

The IHRC which sent a medical team to Nigeria in April to examine health condition of Sheikh Zakzaky and his wife has already said the specialist treatment they require can only be fully accessed outside the African country.

‘President Buhari responsible’ if anything happens to Zakzaky

In the meantime, the IMN issued a statement on Thursday, saying the group’s leaders will hold Nigerian President Buhari Muhammadu responsible “if anything should happen to Zakzaky or his wife in detention.”

“Their health status is of paramount significance to us all and Buhari must be held responsible should anything untoward happen to either the Sheikh or his wife,” the group said in a statement.

“We are once again calling for the immediate release of our leader and his wife, whose health situations appear to be deteriorating very fast, especially in view of the reported poisoning they were subjected to in detention,” said the IMN.

Nigeria's House of Representatives also said in a statement on Thursday that it would help to resolve the issue.

It came in response to a letter from a group of protesters, who gathered in front of National Assembly to call for Zakzaky’s release.

“tyrant Buhari has poisoned Sheikh Ibraheem Zakzaky (H) and the deafening silence of all those that are detaining Sheikh Zakzaky and his unlawfully is creating high tension,” read the letter.

The cleric has been held in detention since December 2015 despite a high court ruling and was charged just in April with murder, culpable homicide, unlawful assembly, disruption of public peace and other accusations. He has pleaded not guilty.