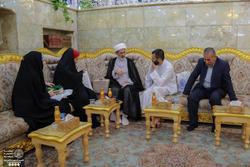 Two Brazilian professors and journalists visited the holy shrine of Imam Ali (AS).

According to the correspondent of Rasa News Agency in Najaf Ashraf, two university professors and journalists, coming from Brazil, visited the holy shrine of Imam Ali (AS) and received some information on the Islamic principles.

The chairman of the executive affairs office of Imam Ali (AS) holy shrine, Hujjat al-Islam Sheikh Abd as-Sada al-Jaberi, welcoming MS Victoria Da Silva and Lilian Ribeiro Sanchez, stated, “The two Brazilian professors visited Najaf and the holy shrine of Imam Ali (AS) in order to obtain some authentic information on the facts of Islam, attacked each day by the media of the West and Takfiri group of ISIS.”

The chairman of the executive affairs of the shrine presented some books on the Islamic principles to the said Christian ladies.

Attended by the students of West Bohemia University

The analysis of International Relations according to the Islamic Republic

The Promotional Discourse on the Theories of Social Justice