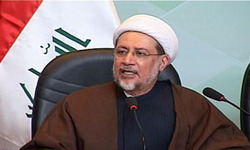 On the side-line of the ceremony, Sheikh Khalid al-Atiya told the correspondent of RNA, “This ceremony is held each year in the same place aimed at preparation for the time of Hajj.”

According to the correspondent of Rasa News Agency in Najaf Ashraf, the chairman of Iraq Haj Supreme Council, Hujjat al-Islam Sheikh Khalid al-Atiya, speaking in the annual ceremony of Haj, held by the custodian organization of Imam Ali (AS) holy shrine, in Fatima Zahra courtyard of the said shrine, maintained, “This year, the number of pilgrims who are arranged to leave Iraq for Mecca has raised from 33 thousand to 50 thousand people.”

On the side-line of the ceremony, he told the correspondent of Rasa News Agency, “This ceremony is held each year in the same place aimed at preparation for the time of Hajj.”

Al-Atiya added, “Clerics play an influential part for the proper management and performance of Hajj ceremony, and what they do isn’t confined to the elaboration of the religious orders and rules, as they make speeches on different religious issues.”

He finally said, “Hajj Supreme Council attempts to provide pilgrims with some additional services, and it attempts to serve them properly in terms of accommodation, nutrition and transportation.”