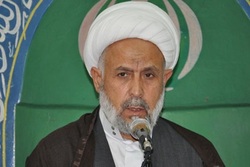 The chairman of the Lebanese Scholars Soor (Tyre) stated that following their failure in Syria, the US has been attempting to take revenge on Iran.

RNA - The chairman of the Lebanese Scholars Soor (Tyre), Hujjat al-Islam Sheikh Ali Yasin, delivering the sermons of this week Friday prayer, said, “Following their defeat in Syria, the Zionist Regime and the US are implementing some new plans in the region against Iran, such as seizing its tanker in international waters.”

Pointing to the internal issues of Lebanon, he stated, “Every provocative word or action against any group is condemned, and we should keep away from tensions.”