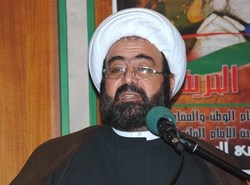 The endowments secretary of the Lebanese Supreme Islamic Shia Council pointed out that Muslim and Arab countries should become united against the Deal of the Century and don’t confine to slogans.

RNA - The endowments secretary of the Lebanese Supreme Islamic Shia Council and the prayer leader of as-Safa mosque in Beirut, Sheikh Hassan Sharifa, making a speech, said, “In the present critical situation of the region, all in Lebanon should speak wisely and steer clear of the tensions.”

He added, “Lebanon is dealing with different problems and the resolution of the existing crises needs public participation. The Lebanese people are supposed to adopt a single position towards the awful plans such as the Deal of the Century and the problems of the Syrian refugees so that the provision of the security and the political/living stability is facilitated.”

Commending the positions of the Lebanese people towards the Deal of the Century, he stated, “We also condemn this evil plan and ask Arab and Muslim countries to stand united against this plot, as the liberation of the occupied lands needs more than chanting slogans.”