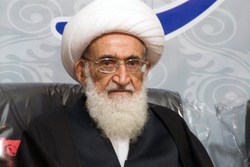 Ayatollah Nouri Hamedani, saying that the enemies are afraid of the jihadi and martyrdom-seeking spirit of the Iranian people, maintained, “The enemies should be confronted resolutely.”

RNA - Ayatollah Nouri Hamedani, a source of emulation, met by a group of the officials working in the cultural centers belonging to the Organization for Mobilization of the Oppressed, saying that the enemy is afraid of the jihadi and martyrdom-seeking spirit of the Iranian people, maintained, “Enemies such as Trump and Zionists won’t retreat by the soft language, they should be faced using the sword. Today, the spirit of jihad, sacrifice and martyrdom ought to be raised as it forces the enemy to back away.”

He continued, “The glorious Islamic Revolution is a great Heavenly blessing, as it rescued us from the oppression and cruelty of the former regime and provided the Iranian people with dignity and honor and superiority, and thus, it is our responsibility to preserve it the best.”

He stated, “The activists of the fields of culture and art should attend to and employ the grand Persian literary works such as the poems of Saadi, Hafez and Ferdowsi”.