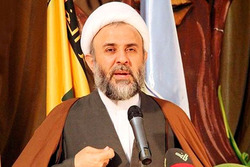 The member of the Central Board of Hezbollah announced that although the US humiliates the heads of some Arab countries, it is frustrated against Iran.

RNA - The member of Hezbollah’s Central Board, Nabil Qavoq, maintained, “Donald Trump humiliates the heads of some Arab countries, however, when his message was delivered to Ayatollah Khamenei, he was humiliated, and it makes the substantial difference between the positions of Iran and Arab countries.”

Qavoq added, “The US is now frustrated by the resistance of Iran, as it has recognised that the policy of pressures has no impact on Iran and it is inefficient.”

“Trump is facing a strategic dead-end as none of his options will bear him a fruit, and accordingly, he is changing his mind again and again”, Qavoq continued.

Qavoq finally stated, “In 10 minutes, Iran rendered Pentagon, White House and the US Congress defeated and opprobrious, it proved that Iran has a power that shatters the superiority of the US.”