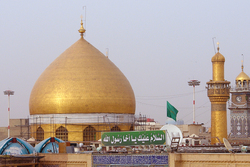 A group of Italian universities’ historians visited the holy shrine of Imam Ali (AS).

According to the report of Rasa News Agency's correspondent in Iraq, a group of historians, coming from Italian universities, entered the holy city of Najaf to visit and closely see the historical and Islamic constructions of Najaf.

The Organisation of the Historical Constructions and Objects of Najaf Ashraf, has made the necessary arrangements for the visit of the said group of some constructions such as the Governmental Palace in Kufa.

The group also visited the holy shrine of Imam Ali and the historical and Islamic constructions/objects held and protected by the shrine Cusodian Organisation.

The Italian experts were surprised by the attempts of the officials of the Custodian Organisation of Imam Ali’s holy shrine made for the protection of the historical and Islamic constructions and objects and stated that the some architectural and painting techniques, as well as valuable items, have been employed in the construction of the holy shrine.