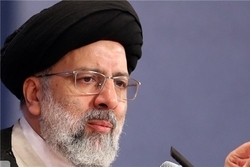 Ebrahim Raeisi stressed the US and Israel’s failure in implementation of their plots in the ‎region, warning them of a new large-scale intifadhah.‎

RNA – Iran’s Judiciary Chief Ebrahim Raeisi stressed the US and Israel’s failure in ‎implementation of their plots in the region, warning them of a new large-scale intifadhah ‎‎(uprising).‎

‎“The freedom of the holy al-Quds is still the Islamic ummah’s priority. Today, after 72 years ‎of the miseries brought by the Zionist regime and its violation of deals and crimes against ‎the Palestinian, Lebanese and other regional countries’ people, they are after implementation ‎of the disgraceful Deal of the Century Plot,” Raeisi said, addressing a meeting of the Judiciary ‎officials in Tehran on Monday.‎

He described the plot to annex the West Bank to the lands occupied by Israel as a prelude ‎to implement the Deal of the Century plan.‎

‎“The US and the Zionist regime will never succeed in implementation of the plan and a more ‎massive intifadhah compared to the past (intifadhahs) will be triggered in Palestine and even ‎across the region,” Raeisi said.‎

His remarks came after the Iranian parliament in its meeting on Monday unanimously ‎approved the generalities of a bill to confront the hostile acts of the Zionist regime against ‎peace and security.‎

The parliament’s National Security and Foreign Policy Commission had on Saturday prepared ‎and approved the bill on “confronting the hostile acts of the Zionist regime against peace ‎and security”.‎

‎“Based on the first article of the plan, all Iranian bodies are required to use the country’s ‎regional and international capacities to confront the Zionist regime’s measures, specially its ‎warmongering and terrorist moves, siege (of Gaza), settlement construction, displacing the ‎Palestinian people and occupation of countries’ lands, including Golan,” Rapporteur of the ‎parliament’s National Security and Foreign Policy Commission Sayyed Hoseyn Naqavi-Hoseyni ‎told FNA on Saturday.‎

Naqavi-Hoseyni said that based on the approval, any cooperation or spying for the Zionist ‎regime is equal to enmity towards God and corruption on earth and activities of the Israeli ‎software platforms in Iran and using its hardware and software products is forbidden.‎

He noted that another article of the plan requires the foreign ministry to pursue the ‎referendum in the Palestinian territories which has been registered at the UN too.‎

The new bill also bans transferring the goods produced by the Israeli companies via the ‎Iranian territories as well as participation of the Israeli nationals and firms in the exhibitions ‎held inside Iran.‎

It also requires the government to pave the ground for the establishment of a virtual ‎embassy in Palestine.‎

‎“The foreign ministry is required to make necessary arrangements to form the Islamic ‎Republic of Iran’s virtual embassy or consulate (in Palestine) and submit the results for ‎approval to the cabinet,” one of the paragraphs of the bill said.‎

‎“The foreign ministry is required to adopt necessary measures (to this end) in consultations ‎with other countries,” it added.‎

The plan was approved on the eve of the International al-Quds Day on May 22.‎

The International al-Quds Day is an annual event opposing Israel’s occupation of Bayt al-‎Muqaddas. Anti-Zionist rallies and demonstrations are held on the last Friday of Ramadan in ‎Muslim and Arab countries around the world, specially in Iran, as well as a large number of ‎non-Muslim states.‎

The International al-Quds Day was started by the late Founder of the Islamic Republic, ‎Imam Khomeini, in 1979 as a way of expressing solidarity with the Palestinians and ‎underscoring importance of the holy al-Quds to Muslims.‎

Due to the outbreak of coronavirus in Iran, the International al-Quds Day will be ‎commemorated differently without holding gatherings and rallies.‎

Earlier this month, an official with the Coordination Council of Islamic Propagation ‎Organization said the Supreme Leader of the Islamic Revolution, Ayatollah Sayyed Ali ‎Khamenei, will deliver a speech on the occasion of the International al-Quds Day ‎corresponding with May 22.‎