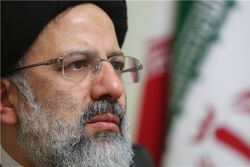 Iran's Judiciary chief says the Iranian people are currently facing “economic terrorism” as a result of the systematic violation of their rights by the United States.

RNA - Ayatollah Seyyed Ebrahim Raeisi made the remarks while addressing a meeting of foreign ambassadors and representatives on the occasion of the Judiciary Week in Tehran on Monday.

Raeisi also said the economic terrorism has been perpetrated against the Islamic Republic in such a way that even the International Committee of the Red Cross has been barred from delivering aid to Iranian people affected by natural disasters.

Last year, US President Donald Trump unilaterally pulled his country out of a 2015 multilateral nuclear deal with Iran, officially known as the Joint Comprehensive Plan of Action (JCPOA), and unleashed the “toughest ever” sanctions against Tehran, notably targeting its energy sector.

Washington has also been building up its military presence in the Middle East under the pretext of alleged Iranian threats.

Since its withdrawal from the JCPOA, Washington has been trying to coerce other countries into joining its anti-Iran pressure campaign.

In April, the White House terminated sanctions waivers for major buyers of crude from the Islamic Republic in an attempt to bring Iran’s oil exports to “zero.”

In May, Washington announced a highly provocative plan to dispatch military reinforcements to the Middle East, citing an unspecified Iranian threat.

Later, however, Trump toned down his highly belligerent rhetoric against Iran and repeated, on several occasions, an offer of talks to Tehran.

Elsewhere in his remarks, Iran's top judge referred to the United States and its Middle East allies as the main human rights violators in Palestine and Yemen, saying the rights of Palestinians are constantly breached, and as latest figures show, as many as seven million Palestinians have been driven out of their homeland as a result of Israeli aggression.

Raeisi further noted that death rows of execution are formed in Saudi Arabia nowadays, but the United States still expresses support for the brutal regime in Riyadh.

Concerning the situation in Yemen, Iran's Judiciary chief stressed that the Saudi regime has on several occasions been blasted as a “war criminal” on behalf of human rights organizations.

Saudi Arabia and a number of its regional allies launched a devastating campaign against Yemen in March 2015, with the goal of bringing the government of former Yemeni president Abd Rabbuh Mansur Hadi back to power and crushing the Houthi Ansarullah movement.