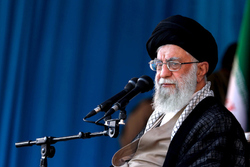 The Supreme Leader of Islamic Revolution gives a speech every Ramadhan about the importance of ‎al-Quds Day, through which Muslims can make a roadmap to help the real owners of Palestine.‎

RNA – The Supreme Leader of Islamic Revolution, Ayatollah Sayyed Ali Khamenei, gives a speech ‎every Ramadhan about the importance of al-Quds Day, through which Muslims can make a roadmap ‎to help the real owners of Palestine.
‎
al-Quds (Jerusalem) is city embracing one of the holiest Muslim monument – al-Aqsa Mosque – as the ‎first qiblah of Muslims and the place wherefrom the Holy Prophet began his spiritual journey, Mi’raj. ‎The people of Palestine, under siege by the Zionists, are looking forward to the help of world Muslims ‎to reclaim al-Quds. The last Friday of Ramadhan month has been name the al-Quds Day by Imam ‎Khomeini, the founder of Islamic Revolution in Iran, to mark the awakening of Muslim world to free ‎Palestine and al-Quds, in particular.
‎
Here is a review of the Supreme Leader’s speeches on the al-Quds Day in different occasions.
‎
Failing of the US “Deal of the Century”
‎
The Supreme Leader said last year that the cause of Palestine is a principal issue not limited to Islamic ‎governments and states, but a humanitarian issue which makes vigilant hearts beating to what ‎happens to Palestinians.
‎
Ayatollah Khamenei noted that the al-Quds Day becomes more important when it comes to the ‎treasonous measures taken by the United States to impose their Deal of the Century which “won’t be ‎successful and will never realize and the US and its followers will fail in this issue, as well.”
‎
Ayatollah Khamenei, in another occasion, said that the al-Quds Day demonstration is in fact an ‎individual phenomenon in which people come out beneath the hot sun to indicate that despite the ‎propaganda by foreign governments, Muslim nations have been more close to and more aligned with ‎Iranian people.
‎
Defending Palestine is defending the truth
‎
The al-Quds Day doesn’t only mean defending a suppressed and displaced nation, it is rather fighting ‎against a tyrant, arrogant political regime, according to the Supreme Leader. He has also said: ‎‎“Today, defending Palestine is defending the truth; a truth much broader that the cause of Palestine.”
‎
‎“You see when you speak out against the Zionist Regime, American officials and politicians feel ‎antagonized against you; they feel that they are hurt; that’s in fact the truth. That’s why al-Quds Day ‎must be commemorated.”
‎
The Supreme Leader also praised the presence of the youth in al-Quds Day demonstrations.
‎
al-Aqsa Mosque a priority of the Muslim World
‎
In a conference on extremist movements in Islam in 2014, Ayatollah Khamenei expressed regret that ‎Muslim nations have been involved with the problems and conflicts made by the global arrogance ‎within the Islamic world instead of mobilizing all their forces against the measures and conspiracies ‎that the Zionist Regime has been doing against al-Quds and al-Aqsa mosque.
‎
He said that the problem of extremism is something injected by the foes of Islam into the Muslim ‎world and Muslim scholars must inevitably deal with the problem; adding: “But the main issue is the ‎problem of Zionist Regime; the main issue is al-Quds… it is al-Aqsa Mosque.”
‎
Palestine protected from the enemy’s tricks
‎
On the eve of Eid al-Fitr 2013, the Supreme Leader said in the meeting with Iranian officials and ‎ambassadors of Islamic countries that the cause of Palestine had turned once again to the main issue ‎in the Islamic world thanks to the Islamic awakening. He underlined that the opportunity must be ‎taken and Muslims shouldn’t let that be hidden under the conspiracies and tricks of the foes of Islam.
‎
He said that nations assess their governments by the position the take regarding Palestine but ‎sometimes despotism wouldn’t let the resolve of nations to be disclosed, adding that demonstrations ‎by peoples of the region in al-Quds Day let them speak out what was in their hearts to the chagrin of ‎the Zionists.
‎
The day of petition
‎
‎“al-Quds Day is an international Islamic day and great day in which Iranian people and other Muslim ‎nations speak out the truth which the global arrogance invested for sixty years to silent it. The ‎formation of Islamic Republic in Iran and declaration of al-Quds Day and turning the embassy of the ‎Zionist Regime in Tehran to the Palestinian embassy was an assertive movement against the sixty-‎year-long conspiracy of imperialism to wipe out Palestine from the world map,” the Supreme Leader ‎said in a meeting with university professors in the summer of 2012.
‎
He had told in the previous year that Iran’s “united and awake nation” who follows up global issues, ‎Islamic world issues in particular, with sympathy and recognizes the issue of Palestine as an internal ‎issue.
‎
Palestinian nation resistance
‎
In a meeting with Palestinian leaders in 2010, Ayatollah Khamenei said that the Zionist Regime was ‎trying to turn Palestinian nation away from resistance by imposing hefty pressure on the people of ‎Gaza and the West Bank, but Palestinians must be confident that their enormous movement would ‎bear fruit.
‎
The Supreme Leader said in another occasion that the enemies of Islam were trying to remove the ‎issue of Palestine in the public opinion of the world, but to their desperation, demonstrations of all ‎Muslim nations around the globe neutralized their conspiracy and encouraged Palestinians.‎