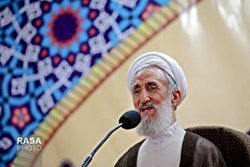 Ayatollah Seddiqi said, “Eid al-Fitr is the Eid of overcoming the ‘commanding soul’ (ego) and ‎returning to the monotheistic nature of man.”‎

RNA – In an audio message, Ayatollah Kazem Seddiqi, the custodian of the Imam Khomeyni ‎Seminary in Tehran, offered his congratulations on the great festival of Eid al-Fitr and said, ‎‎“Eid al-Fitr is one of the two international holidays of Islam.”‎

His Eminence added, “The words that are recited in the qanut of Eid al-Fitr prayers are very ‎pleasant and create honour for mankind.”‎

He emphasizing that Eid al-Fitr is the day of victory over the ‎“nafs al-ammarah” (the ‎commanding soul or ego) said, “The day of Eid al-Fitr means the resumption of spiritual life ‎so that Muslims can live in a monotheistic style.”‎

Emphasizing that the day of Eid al-Fitr is the pride of the Holy Prophet Muhammad, Ayatollah ‎Seddiqi said, “In the holy month of Ramadhan, the Islamic ummah will be filled with ‎monotheistic, moral and spiritual issues and this issue will lead to the development of religion ‎and the satisfaction of the Holy Prophet.” ‎

His Eminence explained said that Eid al-Fitr is the day of the unity and solidarity of the ‎Islamic Ummah and said, “One of the characteristics of Eid al-Fitr is to make the hearts of ‎the deprived people happy. On such a day, the believers will receive the reward of their ‎righteous deeds from God Almighty.”‎

He said that the gatherings of Muslims on such a day show their honour and victory and ‎said, “On such a day, all the believers will be gathered together and will appear before the ‎Lord.”‎

Quoting a hadith (narration), Ayatollah Seddiqi stated, “According to the explicit narrations, ‎‎‘every day wherein no sin of God is committed is an eid.’ On the day of Eid al-Fitr, the fasting ‎believers will appear before God after a month of self-care.”‎

Emphasizing that the highest prayer on the day of Eid al-Fitr is Du’a al-Faraj [Supplication for ‎the Advent of Imam al-Mahdi], he noted, “On this day, we must ask God for the ‎establishment of the global government of Imam al-Mahdi.”‎