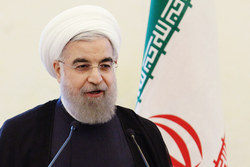 Iran’s President Hasan Rouhani has said that the country will hold Eid al-Fitr and al-Quds Day events in compliance with protocols set to combat the COVID-19 outbreak.

RNA – ‎Speaking on Saturday, Rouhani said that Eid al-Fitr prayers, which mark the end of the holy fasting month of Ramadan, will be held in religious centers across the country.

He added, however, that the prayers will only be held in local religious centers as opposed to major prayer grounds where worshippers usually convene in each city to mark the event.

Rouhani, who made the comments addressing the National Headquarters against the Coronavirus, said that al-Quds Day will also be commemorated in “white” regions where the coronavirus is not deemed a threat.

He added that al-Quds Day will take place without its usual annual rallies and will instead be held within the perimeters of Friday prayers, which coincide with al-Quds Day.

Rouhani exempted the capital Tehran from the measure, where the al-Quds Day event will be organized in the form of a car protest.

“It will be a symbolic measure using vehicles and it will be organized by the Islamic Revolution Guards Corps (IRGC),” he said.

As a legacy of the late founder of the Islamic Republic of Iran, Imam Khomeini, al-Quds Day has been designated on the last Friday of the fasting month of Ramadan to mark worldwide Muslim solidarity with the Palestinian cause.

The event was commemorated every year with major rallies across Iran and beyond.

‘Iran still grappling with COVID-19, but in better condition’

Elsewhere in his remarks, Rouhani said that Iranians have to recognize that the country’s “difficult days” have yet to go by and that the country is still facing a “dangerous virus”.

He added that the country has to prepare itself for “a few months of life with the coronavirus”.

“However, our situation is better than before,” the president added.

“During this time, people and health workers have become much more adept,” in countering the coronavirus, he said.

“Today, we have gone past that,” he added.

Despite facing widespread US sanctions during the coronavirus outbreak, Iran managed to quickly develop its own mass production lines for medical supplies such as ventilators, test kits, masks and disinfectants.

Iran has also exported medical supplies and equipment to other countries.

On Saturday, Iran’s Health Ministry spokesman Kianoush Jahanpour reported 1,757 new infections and 35 deaths from the virus over the past 24 hours.

Iran self-sufficient in production of anti-Coronavirus equipment, ready to export