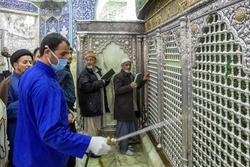 Iran’s President Hassan Rouhani says mosques will reopen in 132 regions designated as white ‎under a color-coded system after being consistently free of the new Coronavirus.‎

RNA – Iran’s Health Ministry has divided the country into white, yellow and red areas based ‎on the number of infections and deaths.‎

‎“Mosques will reopen in 132 towns, which were decided in today’s session as white and low ‎risk, from tomorrow,” Rouhani told a meeting of the National Headquarters for Managing and ‎Fighting the Coronavirus in Tehran on Sunday.‎

‎“Friday prayers will also resume in those areas and the mosques that respect the health ‎protocols,” he added.‎

Iran has already lifted a ban on inter-city trips and malls, with large shopping centers ‎resuming activities. The Health Ministry said Saturday the rate of infections has started a ‎‎“gradual” downward trend.‎

The death toll from the outbreak rose by 47 over the past 24 hours to 6,203, Iran’s lowest ‎in more than a month, ministry spokesman Kianoush Jahanpour said on Sunday.‎

Iran has a total of 97,424 cases of the Coronavirus, he said, adding 78,422 patients have ‎recovered and been discharged from hospital so far.‎

As many as 78 million people were screened for the COVID-19 symptoms in the first phase ‎of a nationwide program and 30 million in the second phase, he said.‎

According to the president, the national Coronavirus committee is also considering reopening ‎schools in low-risk areas by May 16 to allow for a month of classes before exams are held.‎

‎“However, we will continue to review the situation,” the president said with a note of ‎caution. ‎

Iran is one of the Middle Eastern countries hardest hit by the outbreak. Illegal US sanctions ‎have hampered the virus fight in the country, which reported its first COVID-19 infection ‎cases in late February.‎

The United States slapped new sanctions on the Islamic Republic on Friday despite claiming ‎to be ready to help Iran with the Coronavirus.‎

President Rouhani has said the US offer to help Iran in its virus fight is “one of the biggest ‎lies in history.”‎